We are mostly the same, whether we are girls or boys. By that I mean of equal value, but not necessarily quite the same, which would be impossible as well as boring.

(Girls rule!!!) And that will be why the ladies on Girls Heart Books have actually invited a few men to write for them. They’ve got that Steve Cole, for instance. He used the charms of Matt Smith/Doctor Who to get us interested. OK, and that rather lovely Spidey photo of himself. They have Tommy Donbavand, who surely inspires crazy behaviour in his young fans. I don’t see how they could have been like that before he turned up. The poor ‘orphan.’

It’s half term, and one night earlier this week Jacqueline Wilson made an appearance at a rather special sleepover for girls, reading a bedtime story from Paws and Whiskers. It was at Waterstones Piccadilly, where The Children’s Reading Fund organised for twenty girls in care to spend the night in the shop, providing them with new onesies and hot chocolate at bedtime (along with Jacky). And all I can think of is onesies and hot chocolate, and lots of girls having fun. Onesies and hot chocolate. Not the most practical of combinations, however nice…

I’d further like to recommend Nicola Morgan’s latest venture, her Brain Sane Newsletter, which you can subscribe to. You don’t need to be a teacher, or even a girl. And you know Nicola, she knows her stuff, and there’s bound to be something interesting in those newsletters. She recommends coffee or herbal tea for people to work their way through her rather long newsletter. Good value for money (it’s free, of course). 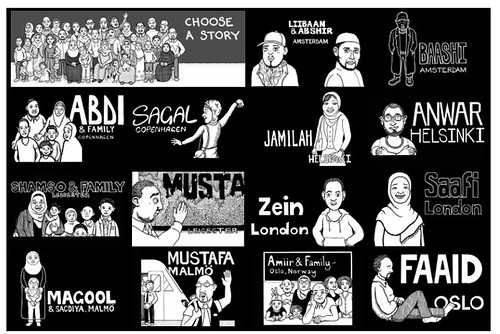 And – this is something I’ve been meaning to mention for months – here is a link to Meet the Somalis, which is a collection of real life tales about Somalis who have left their own country and are now trying to make a life for themselves elsewhere in the world. You can download the whole thing to read. Are people the same? No. Are they equal? Not always. And you change when you live somewhere else, even if you don’t think you do.

I might have wanted to bring up two new young ‘Swedes’ but if that’s what I had in mind I was in the wrong place. And this will be multiplied whenever and wherever parents go and live somewhere different. Their children can’t be like they themselves were. And you generally only live once.

When I was younger and sillier I quite fancied myself here: