Tomorrow Can Wait: Exploring Europe With Our Autistic Child

When Monika Scheele Knight first told me about her book, I was only paying attention to the travelling. I felt it was a very ambitious – perhaps too ambitious – task to undertake with an autistic child. Easier to stay at home, I thought. But, each to their own.

German Monika lives in Berlin with her American husband Scott and their 13-year-old son John. Her book about travelling with John is self published (at least the English version, as I understand it), and exists in two languages. Once I’d begun reading, I had to ask her what language they use at home, feeling it unlikely they could be bilingual with a mostly non-verbal boy. Her reply was that John does understand some English, as it’s what she and Scott use, so she reckons he is a non-speaking bilingual child.

As soon as I had started reading, I also understood why they travelled, and why Monika needed to write about it. After meeting the mother of a 30-year-old autistic son who refuses to go out, effectively imprisoning her in the home, Monika vowed to travel with John to try and prevent that fate for herself. As a toddler John was reasonably willing to go out, if it was on his terms.

So she set off for Rhodes for a week on her own with John, and it went well. What I particularly like is the way Monika and Scott realise they need to take things slowly and not force John (unless absolutely necessary), which means holidays where they occasionally do ‘nothing’ or just a little, like eating lunch bought in the local shop in a deserted children’s playground.

And it’s not just about travelling. In each chapter about a different place they visited, Monika writes about John’s autism in general, how he develops, and what life with an autistic child is like in Germany (much better than in many other countries, I’d say). She muses about various theories, as well as the history of autism, and the murder of handicapped people in the war, and how people treat them when they are out and about. The older John gets, the easier it becomes for strangers to realise he’s behaving oddly because he is not normal, rather than being a badly brought up child. 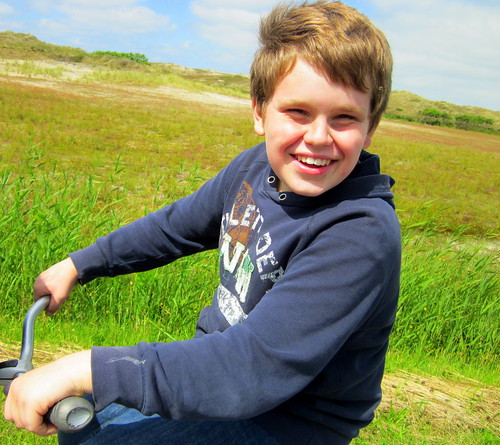 (This rather lovely photo of a smiling John, in Holland, was taken almost immediately after a major meltdown, which is such an autistic way for things to work out. I have borrowed the picture from Monika’s blog, as it was used for the back cover of the book.)

You feel exhausted following the family round Europe. All the driving, or having meltdowns in airports, or moving things out of John’s reach, or stopping him from hurting himself, seem like an endless lot of hard work with no respite. And I’m sorry their experience of Sweden was so poor.

I find case histories irresistible, and this book is one big case history. Very interesting and very inspiring.

One response to “Tomorrow Can Wait: Exploring Europe With Our Autistic Child”