What a book! Buffalo Soldier is my first by Tanya Landman, and I don’t know why I waited so long. A few weeks ago the internet was awash with praise for this book, and I was the only one who didn’t even have a copy… Luckily, hints work well and it didn’t take long for one to arrive.

It’s a sad book. Well, no, it isn’t sad so much as the reason all the really awful things that happen, is sad. That’s history for you. Set in the years before, during and after the American civil war, it shows us a very different America from the one we might know now. 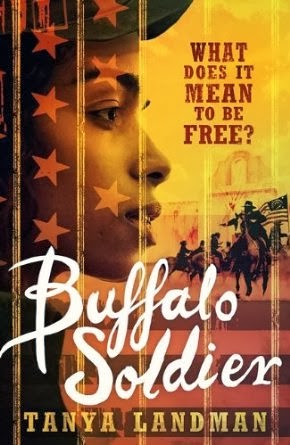 Charley is a slave girl from the south. She doesn’t know her parents, and her master isn’t particularly fair, and his new wife is worse. The overseer’s son persecutes her daily. But then the Yankees arrive, and the black slaves are ‘freed.’ Only, life appears to get worse, and Charley sees so much that is bad, that she steals the clothes off a dead man and disguises herself as a boy and joins the army.

That’s when she discovers how truly bad and unfair and insane the world can be. She works hard, as a new kind of slave, and no matter how much she tries to get herself killed, she survives when her friends don’t.

Tanya covers the history of black slaves and Indians, and the ruling ‘whiteys’ as well as the emerging US by showing us what the world looks like from Charley’s point of view. Her life is so bleak and so difficult, that neither she nor the reader can quite trust the slight ray of hope when it finally appears.

But to have a story book happy ending to what could very well have been a true tale of a young black slave and soldier during the second half of the 19th century, doesn’t seem quite right.

What makes this book so special is that even someone who craves happy endings can love it. The good parts are so very good that they carry the overwhelmingly bad parts. That’s a difficult thing to do, and that will be why everyone was talking about Buffalo Soldier.