As I was saying the other day, I took my time over reading Forge. But that was probably for the best, as I was much better prepared for The American Revolution by now. I haven’t read much fiction set during this period (apart from Chains, the first book about Isabel and Curzon), and looked at from my comfortable perspective 200 years later, I always reckoned America ‘simply freed itself.’ You know, because it wanted to. 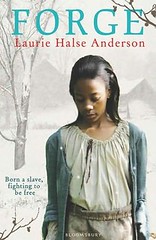 Chains was mostly Isabel’s story, and Forge is more about Curzon. They have finally escaped, but things don’t go well. Curzon ends up enlisting to fight for the Patriots, and most of the book is set in Valley Forge, where George Washington set up his headquarters.

Black soldiers were unusual, but not as rare as you might think. So when the soldiers freeze and starve and nearly kill themselves just trying to survive the winter of 1777-78, at least white and black suffer equally. It’s not even only the poor, as many better off men fought for freedom from the King of England as well.

On the other hand, the leaders at Valley Forge have food to eat, and beds to sleep in. 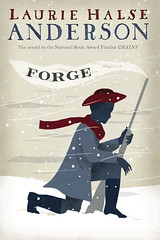 Forge is mainly about Curzon and his fellow soldiers, and about being black and being a slave. Neither Curzon nor Isabel are as free as they would like, and far too many people believe slavery is perfectly all right.

Laurie has put a lot of real people and real battles and real conditions into her book. It’s actually quite interesting to find out that so many of the characters were not made up, and that those who were, were based on real people. Each chapter begins with a quote from something written by leaders of the revolution, as well as by soldiers and others.

If you – like me – hoped for a resolution to Isabel’s and Curzon’s problems, you will find that you have to read one more book first, Ashes. And it’s not been published yet. (At least me being late means my wait will be shorter…)

Maybe there is a lot of young fiction about this period in America. I hope so, because it’s an interesting time. In a way it’s surprising I’ve not come across a lot more, unless very little has actually been written.