‘We’re getting a bit rowdy, folks’

So, there I was, in the back seat of Fledgling’s Clare’s very comfortable Kia, on the way to Philip Caveney’s book launch, when the Plague Doctor jumped in and sat next to me. He had a stick. (In fairness I have to mention he didn’t use it.) It’s just that by then I’d sort of forgotten he was meant to be there.

I have to say I timed it well. A mere four days into the Scottish Bookwitchery and there was a book launch to go to. A bit weird that it was for another Stopfordian, crossing the border for some adulation. (I reckon Philip will have to join me here soon. Scotland is his kind of place.) When I heard he was having a launch for Seventeen Coffins, I really wanted to go, so a big thank you to Fledgling Press and the Holy Rood High School’s marvellous librarian, who let me.

And when Clare emailed to offer a lift, as she ‘was going to pick up a Plague Doctor on the way,’ I felt it was an opportunity not to be missed. It’s not the kind of phrase you come across very often. As for meeting Plague Doctors, I suppose I’d hoped we’d seen the last of him, what with how things went in Crow Boy, but that certainly turned out to be wrong.

So, there we were. And when we arrived at Holy Rood, at the foot of Arthur’s Seat (well, almost) where the action in Seventeen Coffins begins, we were taken into the school’s library, which must have the most breath-taking view of all school libraries, not to mention a very cool librarian (I want her skirt!), where we all fell over each other admiring their very own Tardis. I mean, how cool is that?

Clare and I had colour co-ordinated to match the school’s colours. We were both purple. The hall – with purple seats – filled up with 200 pupils, who heard their librarian tell them Philip’s book is so good, it made her forget the previous day’s dreadful football results.

The author, who has eaten rabbit pie in the name of research, told us about the background to his book, which was a visit to the National Museum of Scotland, where he saw the eight tiny coffins which survived being thrown around by some children in 1836, when they found them hidden on Arthur’s Seat. Philip decided he needed to come up with an explanation as to how the coffins ended up there in the first place. (Sorry, you’ll have to read the book.) 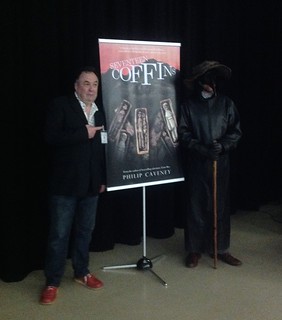 Time travel was the solution. And research is not boring. Philip has made use of real people from back then, so some of his characters are infamous murderers, whom you would have heard of if you paid attention to your Scottish history. And speaking of the devil, he happened to mention the Plague Doctor from Crow Boy, when that very man popped out from behind the curtain, brandishing his stick, and diagnosing a pupil as suffering from the bubonic plague. (He went off to warm up the ovens – for the red hot pokers…)

Reading from Seventeen Coffins, when Mancunian hero Tom meets Edinburgh real boy Daft Jamie, Philip told his audience that he has hidden three copies of the book somewhere on Arthur’s Seat. Get out there and look!

There were so many hands in the air, and so many questions, also in the air, that Philip had to point out ‘we’re getting a bit rowdy, folks.’ I reckon that’s just how he likes them. You want a book launch to be lively. 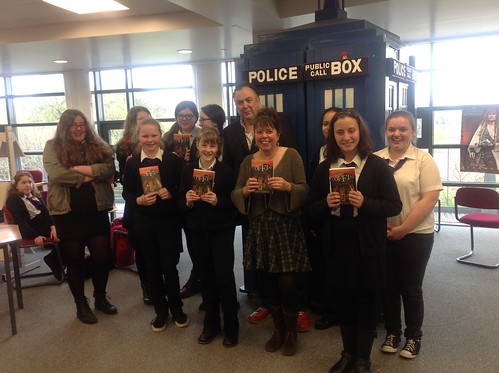 We left him with a queue of fans in the library, and let the Kia take us back to where you need to watch out for the Plague Doctor. (Between you and me, I find the idea of Mary King’s Close and its plague-ish past almost beyond what I can bear. Which will be why it’s doing so well, and people are booking ahead to come and be scared. Why don’t you go too? And then read the book, if you come out of there again.)

8 responses to “‘We’re getting a bit rowdy, folks’”