It feels like it was a mere few weeks since I read the first Badger, the Mystical Mutt book, and here its authors McNicol and Jackson are intimating they’re on book number six! I suppose I have to believe them. It’ll be in my best interests to be on good terms with literary Scotland, so let’s celebrate Badger’s sixth publication day on this 2014 Walpurgis night.

He’s throwing a party in Badger the Mystical Mutt and the Flying Fez. It’s Old Year’s Night and he wants to gather the whole gang. But he’s missing his spotty ‘Chief and things aren’t going well. There is the foggiest fog Badger has ever seen (although I would say it’s unlikely you would see anything in such foggy circumstances). 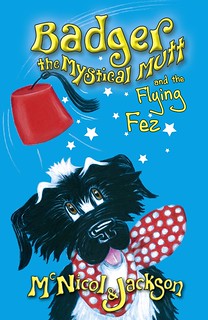 This is where a very naughty Fez called Otto appears and tries – pretends – to help. Most of the gang is also present, and everyone does their bit. Pickle is upset because she is missing someone special, but that’s what you have friends for. And the Badger books are there to show what friends are for.

(Badger was very helpful during Hurricane Sandy. He was a bit stuck in New York, so jumped in and did some work where it was needed, impressing the British Consulate in the process.)

Even the Dog Catcher seems to be friendly. Or is he? Perhaps Old Year’s Night is a time for change.

This is a Badger book, so you can rely on things being sorted out, despite Otto doing his worst.