Scotland for your holidays

Yeah, I know. It’s not as appropriate as it was.

But as we were packing our interim stuff, I said to the Resident IT Consultant, ‘let’s take it, in case we need entertainment.’ The ‘it’ being the jigsaw you see here. I gave it to him for his birthday last year, and although favourably received (or is he getting better at pretending?) it didn’t even come out at Christmas, which tends to be when we need something for the family to gather round. 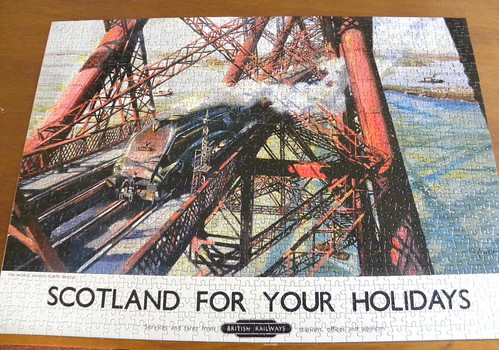 We arrived to find a half made jigsaw puzzle on the puzzle board, and eventually it was finished. At that point the Grandmother complained she didn’t have another, so we looked at each other and he brought out his present for her. She thought the picture was ugly, but she did need a jigsaw, so got going, dividing up the 1000 pieces into edges and red bits and what-have-you.

Good thing it was ignored at Christmas. There wouldn’t have been the time. Turns out this Forth Rail Bridge holiday poster was more complicated than I’d imagined. She complained a bit, but soldiered on.

And after a little over two weeks of slaving over that bridge it was done. Funnily enough it was the Resident IT Consultant’s birthday when it happened. I decided it could be his present, since I had nothing else for him. Not that I’d helped, but I don’t mind taking credit for other people’s hard work.

I did buy it, after all.

This entry was posted in Blogs, Travel. Bookmark the permalink.

3 responses to “Scotland for your holidays”