How many dystopias featuring a girl named Kyla can a witch take?

As long as they are as fantastic as those written by Caroline Green and Teri Terry, then you can keep sending them my way. I have belatedly come to Caroline’s second novel Cracks, and it’s the sort of book I’d happily give to anyone. I defy any young (-ish) reader not to devour this book in very few sittings. 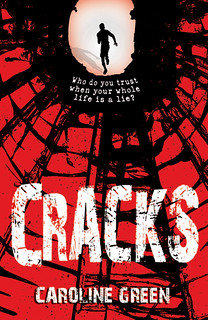 What made me so content was the fact that it wasn’t just like every other book. Some are. This one was ‘itself’ and all the better for it.

14-year-old Cal thinks he’s going crazy. He isn’t, of course, but while I wondered if he was about to be abducted by aliens, the truth is far, far weirder. Most interesting, in fact. Different.

Set in the not too distant future, the world is terribly different from the one we know. But as with any good dystopia, you can see how easy it’d be for us to end up there.

So far Cal has led an unhappy life, but pretty normal. Soon this changes to strange, confusing, and almost hopeful.

I believe there is a sequel, so there’s plenty of scope for more developments. You don’t have to read further, but you will probably want to.

One response to “Cracks”