Timothée de Fombelle’s Vango, Book 1 – Between Sky and Earth is the kind of book that makes your hair stand on end. It’s the sheer unexpectedness of finding something new and marvellous, as well as ‘simply’ getting a reading experience which is pretty special. I’d never heard of Timothée or Vango until the second book arrived, but it looked so good I requested the first book so I could enjoy both. 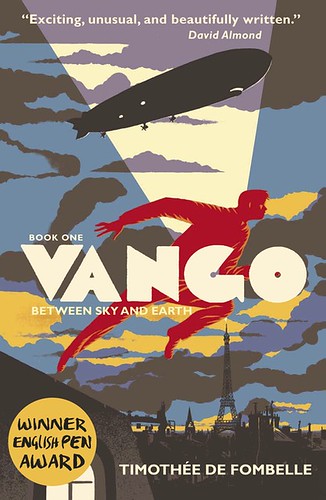 Set primarily in the 1930s, Vango could be David’s – from I Am David – older brother. A displaced boy with a mystery, one who speaks several languages, is hard working, popular and good at many things. Born in 1915, Vango is 19 when we meet him, and then the action moves back and forth from when he was three until early 1936. Set mainly in Europe, we move from Paris to Italy to Germany and Scotland during the exciting fictional 1930s that we love so much.

Vango can climb. Anything. There are Zeppelins, repercussions from the war as well as a slow romance going on. It’s very exciting. Very lovely. Perhaps because people are not talking about this book as much as they should, because it’s French. A translation, by the capable Sarah Ardizzone. It’s a typical example of how you lose out through xenophobia. Admittedly, Timothée’s idea of Scotland is based more on England, but who cares? It’s fun. It has a flavour of The Thirty-Nine Steps, with some Jules Verne thrown in.

Having decided to take a – very short – break before reading book 2, I can’t entirely say where Vango is going. But trust me, it’s worth reading. This is the kind of discovery you want to make, rather than more of the same, whether wizzards or vampires. You get Vango, and countless more colourful characters that you want to get to know better. That’s more than enough.

One response to “Vango”