Into A Raging Blaze

I would like to think that this new Swedish thriller, will be the next huge success story from the country that gave the world the Millennium trilogy. 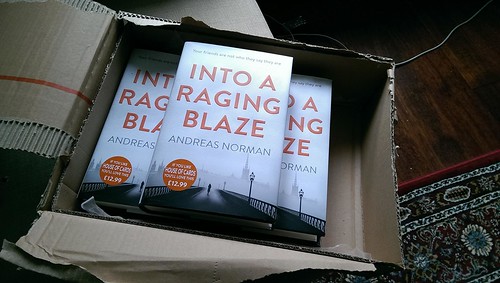 Written by Swedish diplomat Andreas Norman, who has so far only produced a volume of poetry, Into A Raging Blaze is a terrific read. En Rasande Eld, as it is in the original, is more thriller than detective story. Like The Girl With the Dragon Tattoo, it begins with seemingly unconnected things, and the seemingly humdrum routines ‘at home’ at the Foreign Office in Stockholm.

You wouldn’t think that finding out about department meetings or how to request a new office chair would be interesting. But it makes for compelling reading from the first page, and by the time you’ve grown quite fond of FO employee Carina Dymek, her career is in tatters and you swiftly move on to Secret Security Agent Bente Jensen, based in Brussels.

Bente is probably very slightly on the autistic spectrum. She is no Lisbeth Salander, though. Very likeable and very competent, it is she and her secret team who have to work out what’s happened. Did Carina really handle top secret, potentially terrorist, material on purpose, or was she set up? Is her Arab boyfriend Jamal cultivating her to aid him in some sinister plot? Or are they – as they seem to be – simply two nice young people, accidentally caught up in something much bigger?

MI6 are the bad guys here. You need to get used to that. Very efficient, and quite scathing about the naïve Swedes, they really set the ball rolling. And once they have, it’s well nigh impossible to stop it.

So here you find various secret services having to work together, but in effect working against each other. It is very much a page turner, and you become quite paranoid after a while. I read with my heart in my mouth. How can anyone ever be safe from the intrusion of agents the world over? Have you any idea of how it feels to be the prey in such a powerful hunt?

Into A Raging Blaze is the first of two books featuring Bente Jensen. It was published in Sweden last year, with the second one due in 2016. English language readers have something great to look forward to.

4 responses to “Into A Raging Blaze”