It’s hard getting used to thinking of 1989 as being a retro year. But sooner or later most things turn retro, and here is an old favourite being reissued. Maybe you read Janet Quin-Harkin’s Heartbreak Café series 25 years ago, and would like to visit again. I didn’t, so for me it was a pleasant return to old values in a new-to-me book.

In a way this is no different from a Sarah Dessen. No mobile phones or computers, and fashion has changed a little, but other than that we have the same American teenagers driving around in their nice cars, going to school and planning for college, working part time, and falling in love. Dealing with parents and some kind of problem, but mostly hanging out with their friends in that very American way people in the rest of the world are so fascinated by. 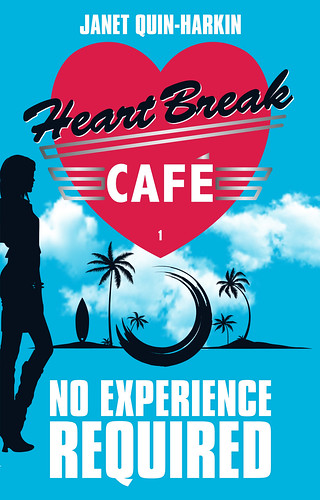 Debbie is 16 and has to find a job when her parents divorce and money suddenly becomes an issue. Instead of going for the safe kind of job you could seemingly expect back then, she finds a job waitressing and cooking burgers at a beach café. The young and handsome boy who runs it reckons she won’t last, so obviously Debbie has to prove him wrong.

The hardship we are all mostly used to today is missing. Or maybe it is still an American idea that if you work hard you will have to succeed. I’d like to think this book will appeal to teenagers today. Whether it will seem hopelessly dated, or just charmingly retro is not for me to say. I was old even in 1989.

But this is fun and a bit romantic and so very American. And to Janet’s credit, she didn’t end the book the way I’d been expecting.