WWI football, but not that match, the one we all know about.

Tom Palmer writes about a young football player going to war, and he’s not the first one. A couple of books I’ve read recently begin with young men and their hopes of becoming successful – professional – players, only to find WWI getting in the way. It wasn’t the done thing to ‘avoid’ signing up because you were about to get your big break.

Jack in Over the Line is a really good player, but once he’s played his first season he enlists, along with team mates as well as players from ‘the competition,’ and they are placed in the Footballers’ Battalion, who play against other soldiers when not in the trenches. 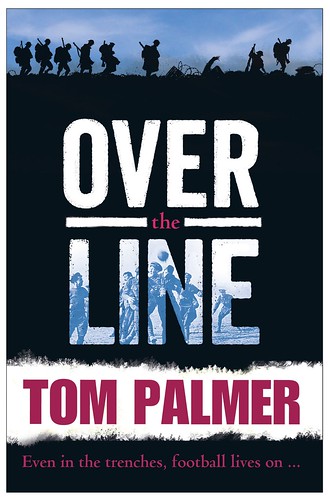 This is another engaging Barrington Stoke story, and because of the soccer aspect it’s refreshingly different from other WWI books. As it’s a short book, it can only afford the briefest of description of life in the trenches. This doesn’t matter – in fact, it possibly helps – as the stark horror of war is painted in a few words.

Some of the people around Jack die, but by the end of the book the reader realises that surviving the war isn’t necessarily the wonderful fate you’d think it would be.

A very footbally war story, and interesting, even for non-soccer fans.

Tom will launch his book with the help of the Manchester Children’s Book Festival on Sunday 6th July. Twice, in one day. Be there!