Scarlet Ibis is wonderful! That’s the book by Gill Lewis, as well as her heroine. They are both called Scarlet Ibis.

Twelve-year-old Scarlet is a hard-working older sister who looks after her younger brother Red, as well as their unwell mother. She loves them both, and both are rather difficult characters. The mother is immature and can’t cope. Red is on the autistic spectrum and loves birds; especially the scarlet ibis. 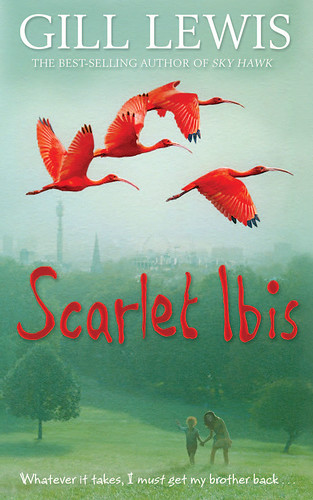 Red looks at the birds he can see from the window in their top floor flat, and once a month Scarlet takes him to the zoo as a treat. He collects birds’ feathers and is most particular about the order they are kept in, and he desperately wants one from a scarlet ibis.

But things go wrong, and the two siblings are separated from each other and from their mum. Scarlet knows she’s the only one who understands Red properly, despite what the social worker thinks, so she needs to find him again.

This is a very warm story, with less of the grey side of life than I had been expecting. Birds, and people who like birds, play a large part in the story. Scarlet makes good friends, and she discovers what it’s like to actually be allowed to be a young girl, and not just a carer. And Red is a fairly capable boy for an aspie and beautifully determined, and you can see that something will surely work out. The question is how.

I knew this would be great, and it was. Is. Read it and feel good about humanity. (And birds, I suppose.)