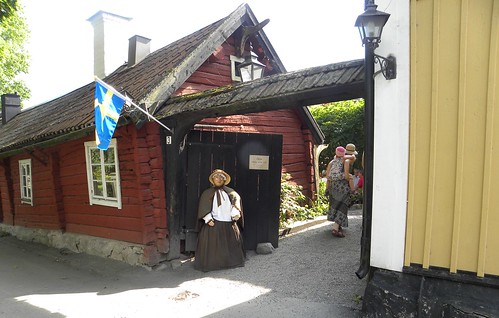 I know we did colours yesterday, but permit me to add a colourful, literary lady; Tant Brun. She is one of Elsa Beskow’s three tants, Green, Brown and Purple. This one appears to run a café in Sigtuna. I was so full of having been ‘thrown out of’ another Sigtuna café the other day, that I completely forgot to mention Tant Brun. I bet she wouldn’t dream of behaving like that. 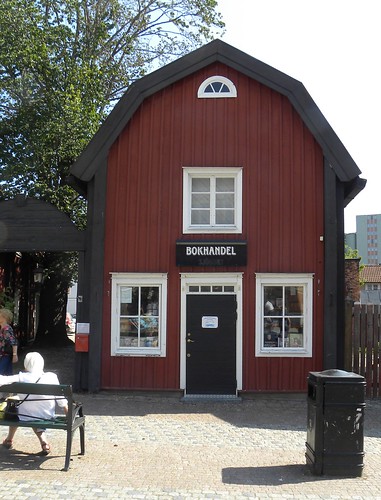 ‘All’ postcards of Norrtälje that I have ever received, have featured this bookshop. I found myself buying the same card myself, and sending it, despite there being many others. But the shop is quite pretty and as the Resident IT Consultant remarked, it grows inside and goes on and on. Rather like Blackwell’s in Oxford. 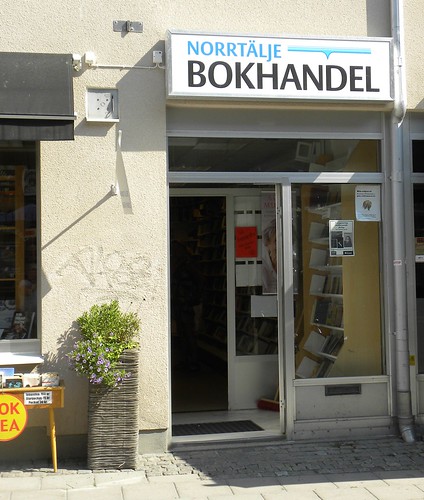 Norrtälje has another bookshop, too. Not as cute, but still a bookshop. (Last time in Norrtälje I bought four plastic fish-shaped soap dishes. Not in a bookshop, I hasten to add.)

As you will know if you called in yesterday, we drove south. After enjoying another breakfast on the terrace overlooking Mariestad harbour, we went to visit my oldest sister. I have met her a few more times than her little brother, whom we saw last week. Unlike him she has no lake, but her flat boasts a larger garden than Bookwitch Towers, and much more forest. Very nice.

Then we drove even more south and ended up at School Friend’s house. The weather continued fine, but it was the first time in over a week that I could sit still without breaking into a sweat. (I know. One shouldn’t mention perspiration. But sometimes it’s all a witch can think of.)

Today is Mr School Friend’s birthday. I’m hoping for cake. And a party. Coincidence is an interesting thing, and I am fairly certain I will see Brother of School Friend, who was once – a very long time ago, it has to be said – class mates with oldest sister (which is stranger than it might seem to you). 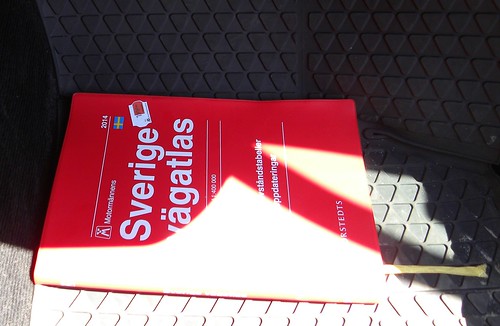 This is the book that brought us all the way north (well, more north than I am used to) and back again. Whenever the Resident IT Consultant asked how far it was to somewhere, I always replied ‘about an inch,’ because strangely enough, it always seemed to be. The atlas can rest now. We know the last part of the journey well enough to manage without help. Although it is a wee bit further than an inch.

2 responses to “Sisters and Friends”