Inverness was cut off from the rest of the world, and for a fleeting moment I believed that this would have no implications for me. The ‘big’ train was cancelled and ScotRail generously let its passengers travel to Edinburgh on the small one. Mine. Whereas my two coach train didn’t have to accommodate every single passenger off the 12 coach train, it was still too full. I did the best I could and hogged the fold-down seat on the non-platform side of the train and read my book and pretended to be really old and didn’t move for 50 minutes.

Haymarket station has been totally transformed! And for the better, even. Very nice. The trams, on the other hand, have added another five minutes of waiting for the green man at crossings – if you are the waiting type – and if you count all the way to Charlotte Square.

Which is where I was greeted by the so aptly named press-Charlotte and given my press pass, before I found a sturdy (-ish) looking chair in the square on which to sit and eat my sandwiches. Before that I had picked up some tickets I’d bought online. I managed to get them despite not remembering which card I’d paid with, nor what my postcode is. Was. I mean, I do, but having used three different ones in the last few months, I was unsure which one I’d told them. Talk about senior moments!

There was a huge police presence. I wondered whether they had suddenly developed a passion for books, or if the festival had begun to attract the wrong kind of customer. (I later learned that Alex Salmond had been. I knew that, actually, but failed to connect the two.) 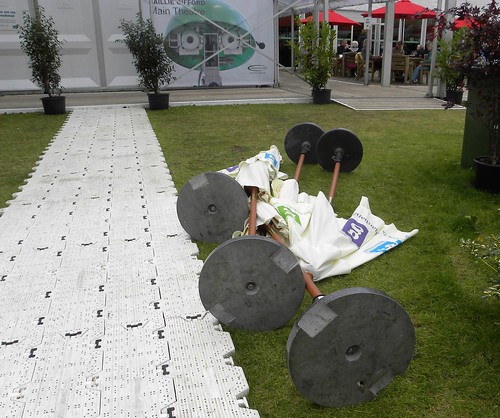 The weather was cool and grey, but clothes worn by visitors included anything from sundress and sandals to double jumpers with jacket on top. (I was sort of medium.)

I think I spied the back of Vivian French, and as I ‘ran’ to get to my event on time, I couldn’t help noticing Philip Ardagh tying up his signing in the children’s bookshop, so popped in at super speed and said hello and goodbye, and he even shook my hand before I was completely gone. I wonder who he thought I was?

Change. You know how I feel about change. They had only gone and changed the layout of the RBS Garden Theatre!! I was so shocked I almost backed out again.