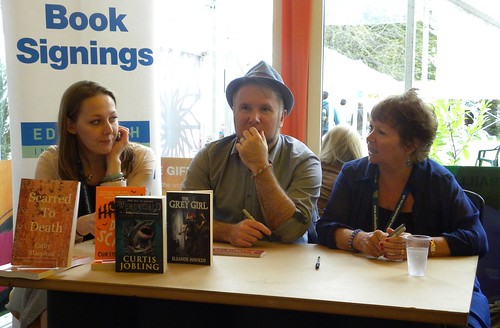 But I didn’t. Back out, I mean. I entered with some determination, because I was there for ghosts with Cathy MacPhail and Eleanor Hawken and Curtis Jobling, which is no small thing. I had only read Eleanor’s Grey Girl, but am happy to take the word of others as to the ghostliness of Cathy and Curtis. Their books. Not them.

Cathy’s most recent title is Scarred to Death, which is a great play on words. Haunt, Dead Scared by Curtis is about a dead boy whose trainers are either intact or quite ruined, depending on whether you are dead or alive. 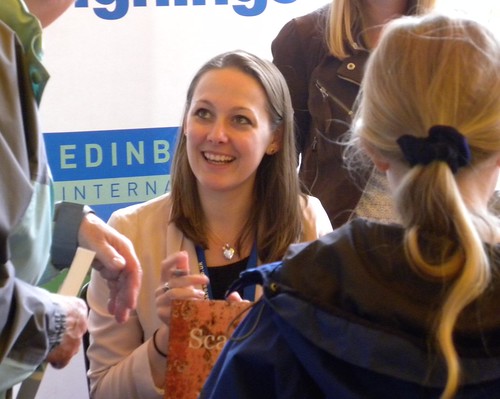 For all three the fondness for ghostly things began at an early age. Eleanor consumed two Point Horror books a day before going to a boarding school with a resident ghost at 13. Cathy liked ghosts ‘ever since she was a wee girl’ and then she came up with the idea of seeing your dead teacher in the queue at Tesco. Curtis has loved ghost stories ‘since he was a little girl as well’ – the remains of hurricane Bertha flapped the tent at this point, if it was Bertha – and has a past which includes flour and string, and a father who liked to scare his children.

Andrew Jamieson, who chaired the event, sensibly let the audience ask questions early on. It was a pretty ghostly minded audience – apart from the lovely baby who chewed on a green guest lanyard to avoid crying – and the answer to whether novels tend always to be autobiographical is yes. 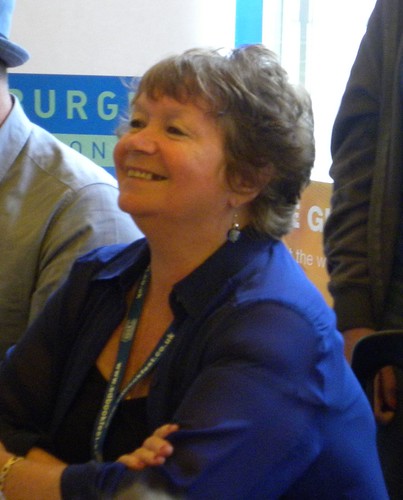 Eleanor dreamed Grey Girl and Cathy also made a sleep related comment. She started work in the mill at 15, being too poor to stay on at school, and then began writing when her children were small, in the belief that one short story ought to be enough, and then discovering she was addicted. Mills & Boon found her attempts too humorous. 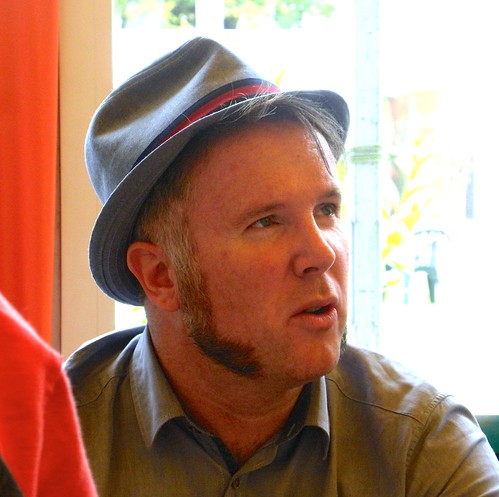 Curtis reckons you should work hard at your hobbies, and you might find your hobby turns to work (yes, but we can’t all draw Bob the Builder!). He drew us a Were-Bob on the strategically placed flipchart next to him.

On what they like to read, Eleanor fell in love with Philip Pullman and His Dark Materials as a teenager. Cathy reads anything from Stephen King to Young Women, but not romance. (I suspect the M&B problem has just been explained.) All seem to be fans of Let the Right One In, which doesn’t reassure me one bit. Bite.

And do they believe in ghosts? Eleanor does. Curtis doesn’t. He said it was just the wind, since we’re in Scotland now. Cathy, well, maybe. She’s not scared, but… Have they seen a ghost? Eleanor has (the advantages of having attended the right school), while Curtis explained that he wakes his wife if he hears a noise in the night. Poor Mrs J.

If anyone is still not scared enough, Andrew mentioned that he quite likes Chris Priestley’s short stories.

Asked if they have plans for what they will do next; yes, they do. 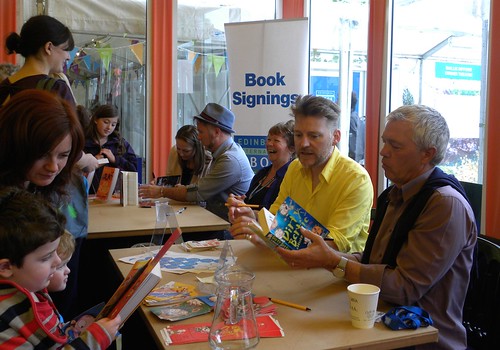 At this point we’d run over in time, and as we were ‘thrown out’ I glanced at the bookshop’s signing area and decided they’d have their work cut out to fit three more authors in, next to the two who were still there. And that while they did, I’d have time for a super fast comfort stop.

As I re-emerged, I found that Curtis had had the same idea, so we walked back to the bookshop together, where there was just space for him between the ladies. There were queues everywhere, and people wanted all kinds of things signed. Curtis even got to ‘deface’ someone’s notebook.

Wish I’d thought of that!