This week’s war events at the Edinburgh International Book Festival have got me started on the war books again. I read and enjoyed Theresa Breslin’s Ghost Soldier, which is aimed at younger readers. That in itself is an indication that some good things need to happen before the end, but it is still about WWI and things are bad as well. 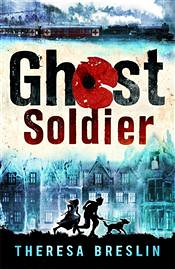 Set in a small village in Scotland, Rob’s and Millie’s father has been away for some time and his letters have stopped coming, when there is a telegram to say he is missing in action. Their mother falls to pieces and it’s up to Rob to look after things.

He gets the idea to search for his father, and while this sounds an improbable action to take, considering the war is abroad and he is in Scotland, it works much better than you’d think. His little sister Millie turns out to be just as determined, and she’s a real asset in their fight against adults who don’t understand.

Witnessing friends and neighbours finding out about their lost ones brings home the horrors and realities of war. Someone somewhere is always finding out that their soldier is dead. At the same time normal life goes on.

If a WWI story can be lovely, this is it. It’s not just a re-hashing of the same old facts, and the Scottish rural setting brings something to the children’s efforts to find their dad. Lots of brave acts from lots of people, and much kindness.

But people still die, or are wounded.