At 9.59 there was considerable panic among Horrid Henry fans. Parents were seen running with their children across Charlotte Square, and then back again a minute or so later. It’s also known as ‘I didn’t need the toilet before but now I do.’ The event started at 10. 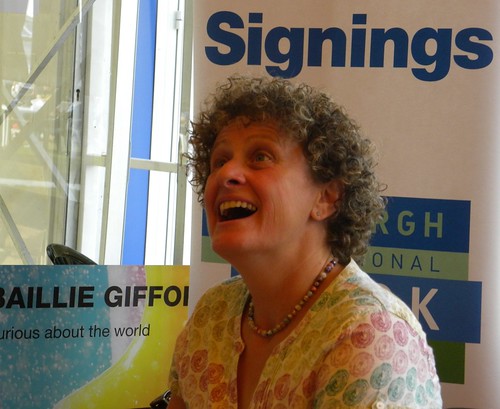 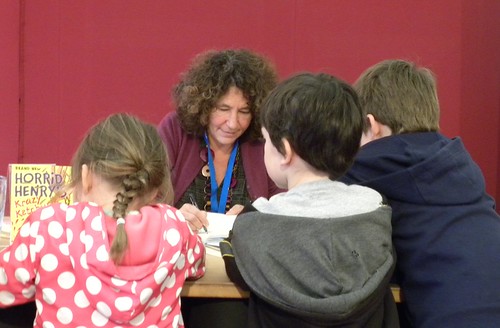 My first – literary – port of call was with Liz Kessler. I then had half an hour in which to take pictures of her signing, run across the square to see if I could catch Francesca Simon still at it, and then get myself to my second event with Gill Lewis. That’s when I remembered I had a book I wanted Liz to sign, and being a popular sort lady she still had a long queue and I wasn’t anywhere near the front of it. So I thrust the book at her publisher Fiona Kennedy and asked her to see to it that Daughter got an autograph. Surprisingly, Fiona seemed to know who I was. 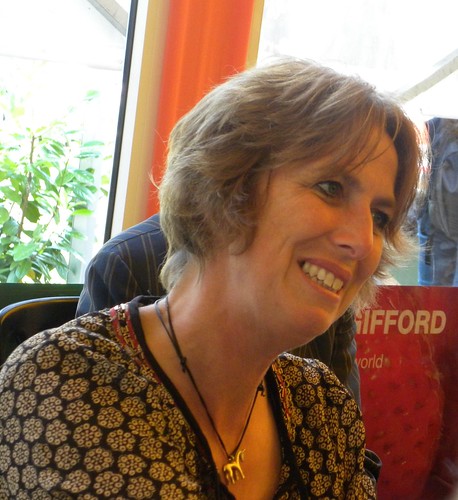 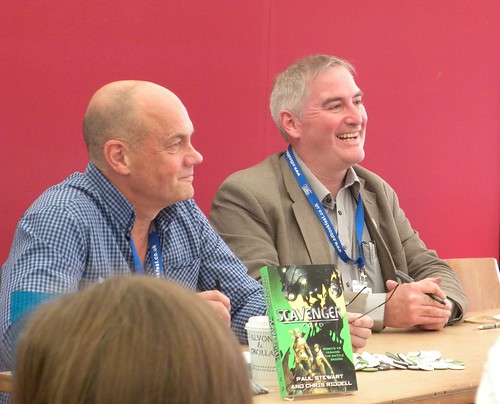 After Gill’s event I had slightly longer, so had time to take pictures of her, and to dash across the square for Chris Riddell and Paul Stewart in the other signing tent. Had to remember to go back to base and get my hopefully signed book back. Then I went to meet Caroline Lawrence, whose Saturday event I had been forced to miss, but who very kindly sacrificed some of her time on me today. 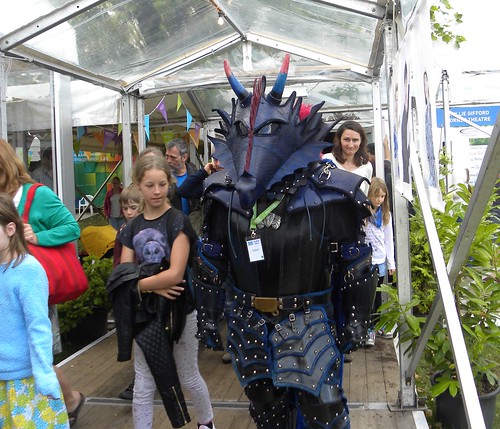 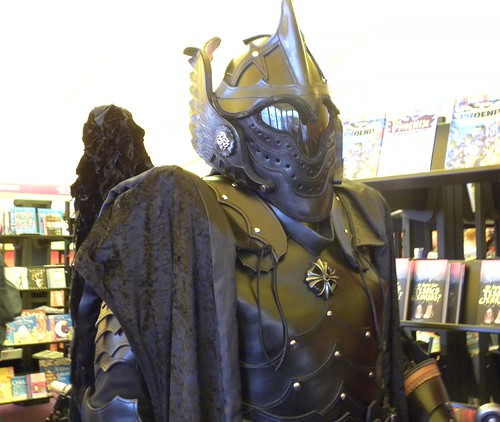 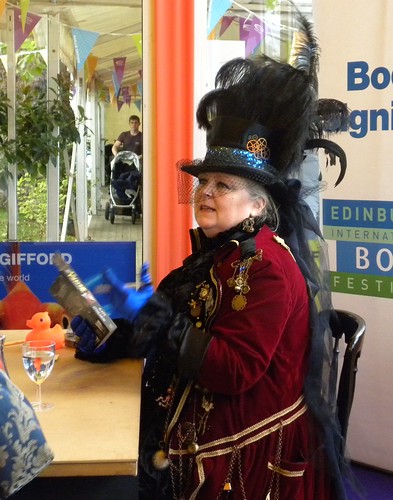 We decided there was time for an ice cream – because we both carried spare food in our rucksacks, so didn’t need lunch – and we exchanged news and discussed what’s hot and what she’s working on now, and then she ran on to hear Kate O’Hearn, whose rather fantastic team of Norse monsters were a sight to behold. I caught up with them in the bookshop an hour later, where they chatted to babies (who will never forget this early literary experience) and posed and were generally rather unsusual. 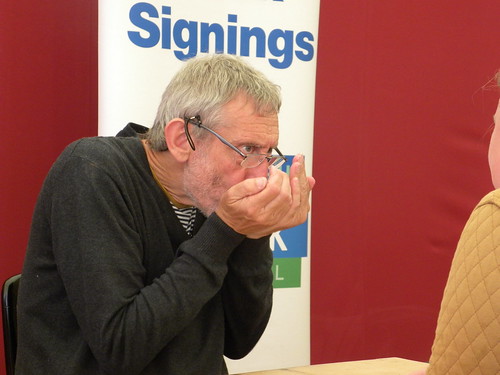 Meanwhile I had found Michael Rosen signing across the square, talking to his young fans with his normal charm and performing facial acrobatics. He too had caused a late rush on the toilets, so that seems to be a hazard with young fans.

‘Backstage’ I found Carol Ann Duffy and I saw Peter Guttridge at a safe distance from sleeve-tugging. Again. While I waited for Simon Armitage to come to his photocall, Kate O’Hearn and her monsters returned, and thanks to Chris Close I got another opportunity to snap these fantastic creatures. 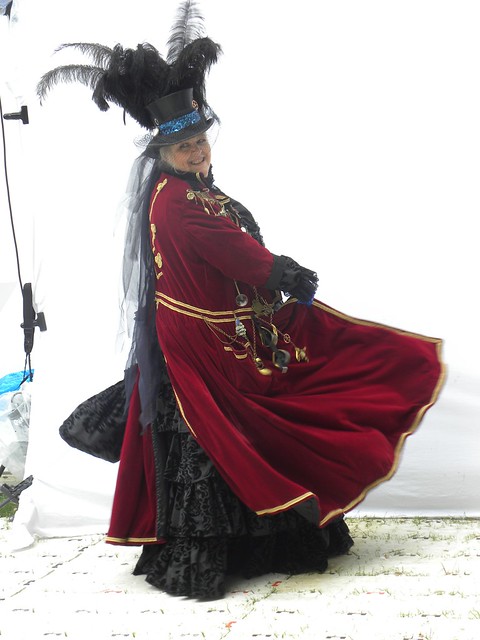 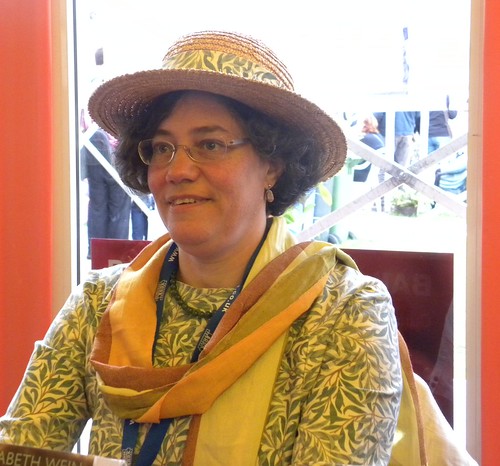 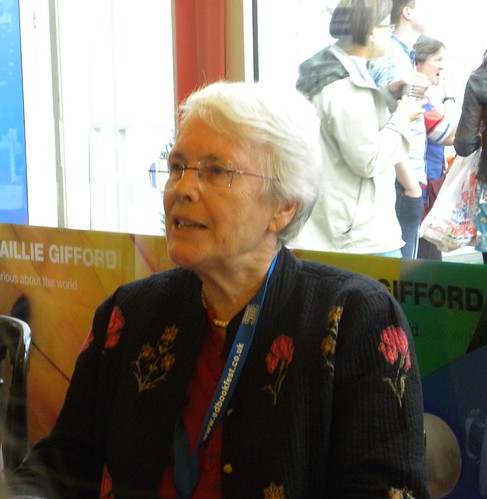 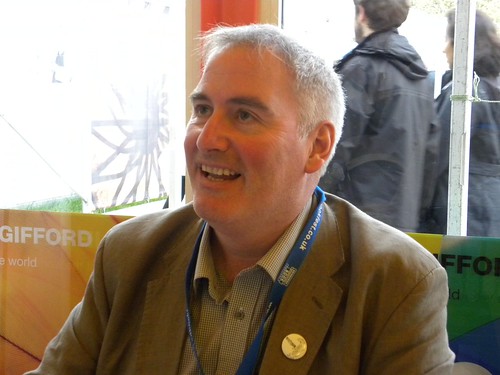 My final event this book festival was another couple of Elizabeths; Laird and Wein. I even had a few minutes during which to take photos of Liz and Liz, as well as of Chris Riddell who was still signing away an hour after his Goth Girl talk, before I ran off to find a tram to the airport. It was high time to collect Daughter from her Californian adventure.