Sunday morning’s first event was Liz Kessler being all low tech (it seems last year she went more high tech than she liked) with a bunch of fervent fans, and a couple of children’s authors, and ‘oh, hello’ a witch at the back. Liz wanted us to keep talking, ‘no, seriously, keep talking,’ while she rustled with paper bags and got herself sorted out with her low tech goods. When we were too well behaved to obey, she asked for someone to tap dance, but no one came forward for that either.

Starting off by interviewing her audience, because she likes knowing who is there, she was pleased to find a fan who treats books on fairies as non-fiction. Liz herself writes about mermaids, fairies, time travel and superpowers.

Then it was time to pick items out of her little box, and the first was a pair of sunglasses; her friend Fred, the Invisible Man (if covered in bandages and wearing sunglasses it had to be him, but we know it’s really Steve Cole). This led to Liz’s brand new book, Has Anyone Seen Jessica Jenkins? and she read the bit where the recently made invisible Jessica goes into a department store where she ‘misbehaves’ in an amusing sort of way. (Jessica became invisible during a boring geography lesson, but I suspect Liz remembered the event where there was a geography teacher in the audience, and she had to do some hasty backtracking regarding the merits of geography… Oops.)

Her tiniest book is a German edition of Emily Windsnap (which made Liz read some Emily to us) and then it was story cube time (which is where you throw dice with pictures on, to get the creative juices flowing, or in this case, Liz threw them at her audience). I mean how can you fail to write some epic work with props like torch, bee, beetle, arrow and fire? Especially with lightbulb thrown in as a valuable extra.

She is very funny, actually, this ‘work-shy tearaway’ from Liz’s old school reports. Her box holds a bouncy ball because it looks nice. Her notebook (this is where I dropped mine) means she loves stationery, and she showed us some old paper napkins and a restaurant menu on which she had in the past written really important things to incorporate into a book. 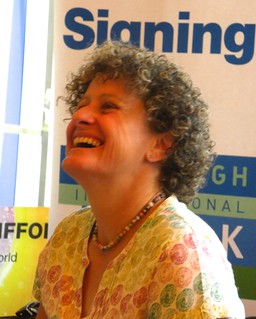 Her best book is one she hasn’t written yet. There will be no more Jessica Jenkins books, but Emily Windsnap 6 is on the way, and so is her YA novel Read Me Like a Book, which will be out next year.

Having stolen Cathy Cassidy’s idea of throwing sweets at her audience, Liz finished by off-loading her remaining sweets. Her own I hope, and not Cathy’s.

And if I’d not lost my touch – or my mind – I’d have been first in that signing queue afterwards. Not all Liz’s fans outgrow her books.