Of birds and bears

So maybe Gill Lewis is the next big thing? She had a long queue outside her venue yesterday morning, and the EIBF director came to listen (I imagine it’s like having the head teacher sit in on a lesson) and everything was great. Long queue in the bookshop afterwards, which meant I didn’t get to say hello until much much later.

They handed out clipboards to the audience, and even the adults were allowed to have one. Gill began by showing us some rock art (as in ‘caves,’ not music) in Zimbabwe (along with her husband holding a plastic carrier bag) – which apparently is like Dartmoor, but different.

Gill is not quite sure why she writes, but rock art has something to do with it. So she asked us to draw an animal and to try and get into that animal’s mind, see what its life might be like. She herself begins a book by drawing animals and people and seeing where it takes her. She’s also very good at it, in the kind of way that makes you jealous because someone seems to be far too talented at too many things.

Having talked to young carers, Gill found that what most of them fear is their family being broken up, so they use a lot of time and effort to pretend everything is fine. She used this in Scarlet Ibis, her latest book. 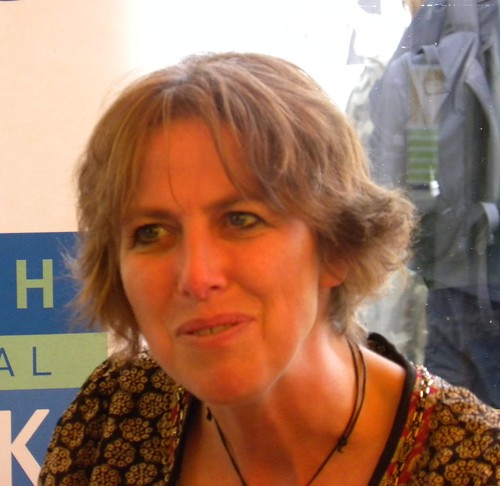 Thinking back to her own childhood, when she certainly wouldn’t have been able to do all the chores that Scarlet does, she told us about a dare in her group of friends. They went to the garden belonging to Mr White, who they just knew was a vampire, and they went to look inside the wooden box where… No, I can’t tell you. It would ruin the excitement for you if you ever hear Gill talk. She then read the dare scene where Scarlet goes to the house where an old woman is known to boil children and eat them.

Not content with being a vet, and a writer, Gill is keen on nature in general, and wants to help re-wild the urban landscape. It’s easy; you might have a birdbox, or leave a tree stump to rot, or grow nettles. Ever the expert, she then tested us on some easy, and some pretty difficult, pictures of wild animals, before asking people to make up a riddle about their drawn animal from earlier.

And I’m glad I have two of Gill’s books still to read.