I do tact so very well. (Like the foreigners I am surrounded by, I cling to my own country’s excellence. Sometimes.) Years ago I dragged Son from one British dentist to another, looking for one that would meet with my approval. (How Son didn’t end up with a dental phobia, I don’t know.) For the last dentist we saw (before I gave up and travelled across the water for treatment for all the family) I had decided in advance what I would say. It would be measured and fair and polite. But what actually fell out of my mouth were the words: ‘I am Swedish and I think Swedish dentists are the best.’

He smiled at me sweetly (he did have a lovely smile) and said that he was Scottish and he reckoned Scottish dentists were also pretty good. Offspring remained with him for several years, until they outgrew his remit.

We did dental holidays from then on. When I happened to mention the annual dental trip to Sweden to Tim Bowler once, his retort was that my dentist must be one hell of a dentist. (I was a little taken aback at his use of hell. Tim is always very proper.)

Anyway, Son eventually found a dentist in the UK that he liked. I went there once as an emergency, and he was fine (ish), but with a solid mistrust of foreign dentists (which is rich for someone who hails from outside Britain).

But most good things have to come to an end and my trusty Swedish dentist retired. And I moved. And I had another emergency, because I am old and so are my teeth. I felt so willing to try new things that I went to see Aunt Scarborough’s dentist. I liked him. He seemed very competent, for a foreigner. And with as sweet a smile as his polite fellow countryman from that other occasion.

I have actually made the jump now, for real. He has an admiration for Swedish dentists, which does him credit. He sells books, too. In the waiting room there are shelves of used bestseller paperbacks, sold in aid of a charity. It’s a clever idea. Instead of sitting there reading a magazine you couldn’t care less about, you can start on a book. (Me, I bring my own, but we have already concluded I am abnormal.) And once begun, you will want to finish, so you pay 50p and the book is yours. 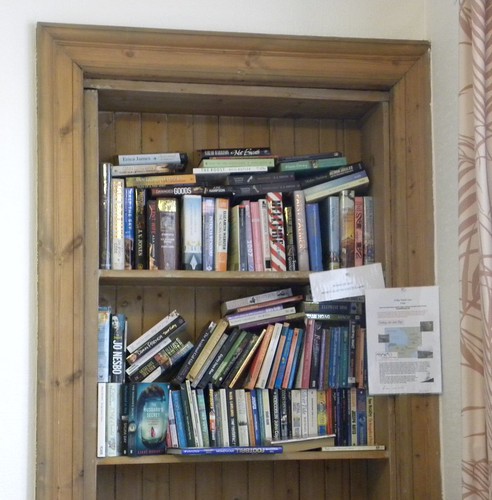 Last week as we were whiling away the time between injection and action, he asked if I had noticed his multi language wall posters. I had. He asked if I would do one in Swedish for him. It has to say something like ‘for healthy teeth, brush twice a day.’

So as the drill went to work, I lay there pondering how best to phrase it. I wanted my translation to be as good as Swedish dentistry.

This entry was posted in Books, Languages, Tim Bowler, Travel. Bookmark the permalink.

3 responses to “Brush twice a day”