I almost, or very nearly, thought the unthinkable. Like, ‘I know Eoin Colfer’s latest WARP novel will be good, but perhaps I don’t need to read it. There are many other books to read.’ Ouch! (My knuckles really hurt. But I was asking for it.)

What I am saying, sister, is this: Eoin writes great books. They don’t deteriorate for being so many. A sequel is still an Eoin Colfer novel. Thinking that there is no need to read, is a very stupid idea to have. But it’s nothing that a good rap over the knuckles won’t cure. Sister.

And of course, time travel is a useful subject to pick. Time travel messes with the system, and you will never be quite the same again. And since yesterday’s future is no longer today’s future, you can – in theory – write as many books as you want. There will be something a little different in each reality. But preserve us from the horrible possibility that there will be no Harry Potter. That would be too much. 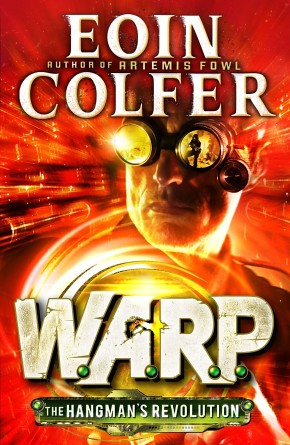 So, where was I? Good question. I could barely remember where we left off. Riley was in his own Victorian times, I believe, and FBI Agent Chevie returned to her own present London. We thought. So we did.

‘scuse me. Eoin does Irish so well. (I know. There is a reason for that.) So he does.

(Sorry, I really must stop.)

So, Chevie’s life isn’t going so well. It’s about to end pretty soon. Or is it? Depends which life, perhaps. She is reunited with Riley. So she is. (Oops.)

Victorian London is full of modern-day men, and now a few modern-day women, too. Sister. Queen Victoria is at risk. The man who runs Chevie’s most recent life has plans for the future. Chevie and Riley must put a stop to them, if only to safeguard Harry Potter’s existence-to-be. Enemies become allies and vice versa. There is an astounding romance, and Missus Figary’s son does well. Some other people don’t. On the whole that’s good.

And that goes for The Hangman’s Revolution, too. Don’t be fooled into thinking that humorous Irish children’s adventures that are lightweight are, well, lightweight. If they have anything to do with Eoin Colfer they will be must-reads. I hope I’m never again afflicted by such treacherous thoughts. So I do.