Off the Page with Teri Terry

Deep down I knew. All day I stalked round the house thinking ‘I couldn’t leave it looking like this if people were coming.’ But we were going out for drinks, not staying in, and there was no need to clean or tidy or even remove the empty Ikea boxes or the reading lamp that almost went up in smoke that afternoon. Or anything.

So obviously I asked Teri Terry and Mr Terry round for a cup of tea. As you do. Being polite people, they even praised the hall for being nice, which it might have been were in not for all the stuff. But this is Stirling and I don’t believe you can go out for cups of tea at eight pm, so Bookwitch Towers was the place to go.

Before my domestic embarrassment, we’d had a nice evening at St Ninian’s Library, were Teri’s talk was part of the Stirling book festival. I’d not heard Teri speak in public before, so looked forward to it. There were a good number of readers of the right age – i.e. not like me – and many came without adults, which was particularly encouraging, I felt. But then I know that Teri’s fans do like her. 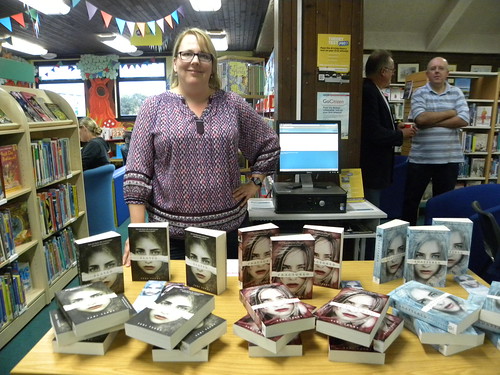 There were soft drinks and slices of swiss roll, and they switched on the coffee machine for the adults. Nice warm welcome for everyone (and I only mention it because it doesn’t always happen). They were most helpful about toilet access as well (although I have to admit that was mainly me…).

Most people seemed to have read Slated, and a few had read Fractured, but I might have been the only one who’d got to Shattered. Lucky them to have so much to look forward to. Teri read from the first two novels, free from spoilers, but felt she couldn’t do that with the third book without giving everything away.

She started off by answering the questions she most commonly gets asked, just to get her funny name and accent and all the rest out of the way. (You can find much of it in my interview with Teri from last year.) Teri reckons writers are often a bit crazy, they might move a lot and become used to being outsiders, observing others. 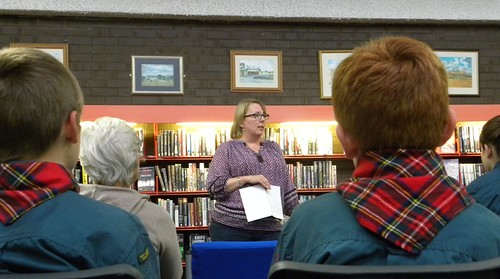 Teri herself is very interested in nature versus nurture, which was relevant both in her former job as a lawyer, but also now when she writes fiction. She talked about the evening of 9/11 (she was in Australia), and as she did, I did a quick calculation and came to the conclusion that most of the audience had not been born then, or were very young indeed. It’s weird how fast things become history.

Her next book, Mind Games, will be published in March next year (she showed me the cover image on her laptop and it looks fantastic), and she is currently writing the next book again, with a deadline in December, to be published next autumn or spring 2016.

Asked about writing for boys, Teri said that she doesn’t see readers as boys or girls, but as people. She also doesn’t want to suggest which age her books are for, although most readers seem to be from about eleven and older.

Like many authors Teri is very interested in stationery. She has a big collection of notebooks and can’t possibly start writing a book in the ‘wrong’ notebook. She once had to spend a week shopping for the right one before she could begin. She can type really fast, but finds it easiest to start a book writing by hand, moving on to her laptop after a while.

Because it’s not healthy sitting in bed all day writing, she now tends to get dressed every day, and she goes to write in her shack in the garden. But she needs to speak to humans every now and then, so has to leave her shack occasionally. 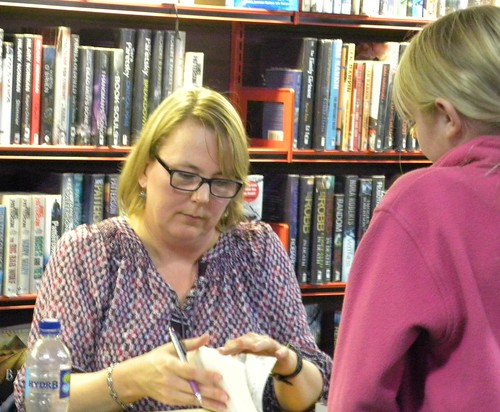 That’s when she comes to lovely events like this one, right on my doorstep. After which she ended up much more on my doorstep than we’d intended. It was nice. Very nice. In case Teri and her Mr Terry ever feel like coming back, I will clean the house, decorate it, and purchase some green tea. Possibly find the wine glasses too, just in case.

This entry was posted in Authors, Blogs, Books, Travel and tagged Library, Off The Page, Teri Terry. Bookmark the permalink.

3 responses to “Off the Page with Teri Terry”