The Sun Is God

The end of Adrian McKinty’s The Sun Is God is unlike most crime novels. I won’t say how, but it’s hardly surprising that an unusual crime story ends in a somewhat unorthodox way. 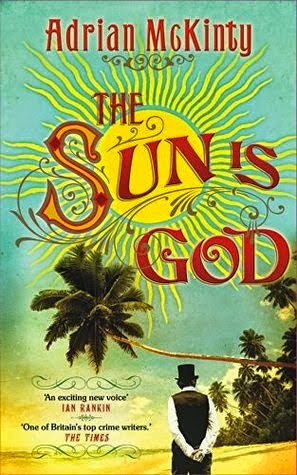 It wasn’t at all as I had imagined, even when I did visualise something the complete opposite of Adrian’s Northern Irish crime. Set in German Neu Guinea in 1906 it is very different, but at the same time quite normal, while also rather insane. I hope that describes it?

Will Prior is a most Duffy-like character, and you will feel right at home with him. I found it harder to feel at home in this South Pacific German setting from before WWI, because it’s unlike anything I’ve come across. Much rougher than other exotic crime novels, and probably much truer for it.

There is an island near Herbertshöhe where Will lives, where a group of – frankly lunatic – German nudists have settled. They live off coconuts and bananas, and they act pretty bananas too. One of them has died in mysterious circumstances and Will’s past as a military policeman means the Germans ask him to go and investigate.

Adrian has mixed a few fictional characters like Will, with the crazy Cocovores and with real people from Herbertshöhe, and written a story based on deaths that actually occurred in real life.

Full of nudity, this is a story that I can’t see being made into a film (as the movie-minded Resident IT Consultant reluctantly decided once he’d got some way through the book). But it’s different; I’ll grant you that. And the end is, well, thrilling.

6 responses to “The Sun Is God”