Sunday morning at Bloody Scotland just had to mean Sophie Hannah on writing the new Poirot. As Alex Gray who talked to Sophie said, it’s the kind of thing that will make you very excited. There had been a lot of serendipity involved in her getting the job, which involved Sophie’s crazy maverick of an agent (a man with hints of Sophie’s mother, Adèle Geras), a HarperCollins editor, Agatha Christie Ltd, and the fact that Sophie already had an idea for a plot that she simply couldn’t make fit into her own novels.

A life-long Agatha Christie fan, Sophie knew the books very well (and hearing her talk about them made me want to rush home and start re-reading), and like Poirot she is rather OCD (in her case about the tassels on her Persian rug). She reckons that David Suchet is Poirot, but she didn’t write with him in mind. There is a strong film interest in her book, The Monogram Mysteries, but as she pointed out, David Suchet has said he won’t do more Poirot. 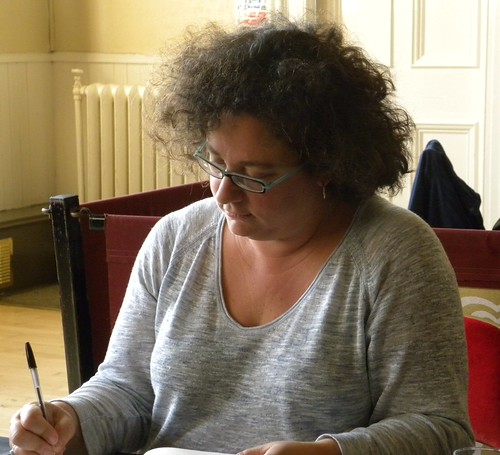 The novel is set in 1929 in the gap between The Mystery of the Blue Train and Peril at End House. Poirot has gone on holiday, to temporary lodgings opposite his own flat (which seems to have been inspired by Sophie’s father, Norman Geras), in order to be free from people seeking his help. The story is told from the point of view of a young detective called Catchpool, to avoid Sophie having to try and imitate Agatha’s style of writing. Catchpool is there to offset Poirot, to be bright, but obtuse.

One of the many coincidences in her being given the task of writing the book was that long before this she had booked a family holiday staying at Agatha Christie’s house, Greenway. Another odd thing was that the week they were there, the filming of Dead Man’s Folly took place on the property. Sophie worked every evening, and by the time the holiday was over, she had the whole novel in her head. She is ‘very serious about crime fiction’ which is the best kind of fiction.

She accidentally invented a new way of writing while jotting down her ten page plan, when it became 100 pages with every detail of the book. Sophie found that this meant she could forget worrying about plotting while also trying to write nicely, as the job had already been done. (She has since written her latest novel in this way as well.)

Before Sophie was allowed to go public with the news about her book, she discovered on Twitter that feelings go very deep when it comes to people taking over writing somebody else’s work, and she was shocked but not worried. She sat down and thought about it and came to the conclusion it wasn’t morally wrong, and that real fans would want to read a new book, and others were free to not read it. Most of her Twitter followers have since come round, with the help of tea and scones, except for Troy in Minnesota.

There was no reason to list what had to be in the book; she knew instinctively what it needed. She’d be happy to write another Poirot, but does not feel she should be the one to write about Miss Marple – a shrewd old bat – but this would be better done by someone else, like Lee Child…

Her Christie favourites keep changing, but Murder on the Orient Express remains on top, along with Sleeping Murder, and more recently Lord Edgware Dies (it’s got the best murderer in it) and After the Funeral (best motive) and Appointment With Death (psychological tyrant).

People who say Agatha was not a terribly great writer are wrong. There’s a reason Agatha Christie sold more books than anyone else, apart from the Bible and Shakespeare. The books can be read by a 12-year-old ill in bed, or a middle aged professor. They are the perfect blend of simple and complex; funny but filled with darkness, suffering and torment. Sophie reckons that people who say the books are no good ‘might just be a bit stupid.’ 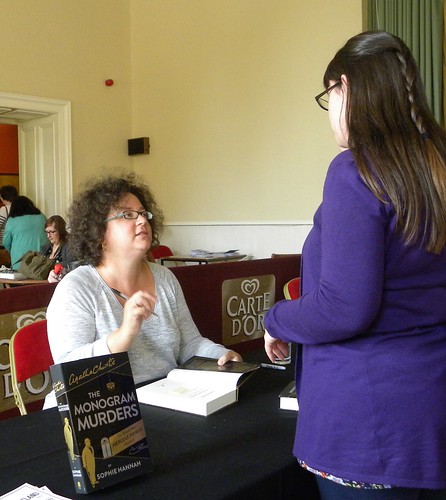 The last question of the morning came from ‘Troy  in Minnesota,’ or so he claimed. Probably here for his tea and scones. Sophie said she likes rules, whether for poetry, crime or Agatha Christie. And her own next book has a bit of Golden Age Mystery in it, now that her appetite for such things has been awakened.

Alex Gray spoke for all of us when she said that we would happily have stayed another hour. At least. I feel sorry for anyone who didn’t get out of bed early enough to hear Sophie talk Christie.

5 responses to “Sophie Hannah on Poirot”