Opal Plumstead is a true sister of many of Jacqueline Wilson’s other heroines. She’s artistic and likes to read, she’s intelligent – if a little immature – and she’s outspoken. And she has a problem, like all her ‘sisters.’

Opal’s Oxford educated father ends up in jail, and her time at school comes to an end, despite the fact that she is only 14. This is 1913, and 14-year-olds could be called upon to be the family’s breadwinner. Opal doesn’t have a very good relationship with her mother, or her flirty older sister Cassie, but still she goes out to do factory work. 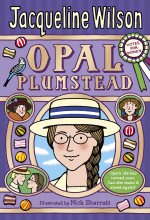 If you leave out the bleak last 18 pages, this is a typical Jacqueline Wilson novel for slightly older readers. It is a tale filled with personal triumphs and failures, and it also gives the reader a history lesson in what life was like one hundred years ago, with the suffragette movement and the start of WWI. It’s not boring or old-fashioned, though. Opal talks like her modern counterparts, which makes the story easier to access. It’s almost as though we time-travelled to the pre-war period.

She has to battle not only with what the neighbours will say (and they do) or how her mother and sister perceive her, but she loses her one and only friend, and she finds it hard to get on with her new workmates at the factory. But Opal has her artistic talents and she is full of ideas. Not always realistic, but still.

Cassie falls in love with a married, wealthy man, and Opal is very concerned. Then she herself meets an older boy, who is rich, and thereby out of her league.

And there’s the war.