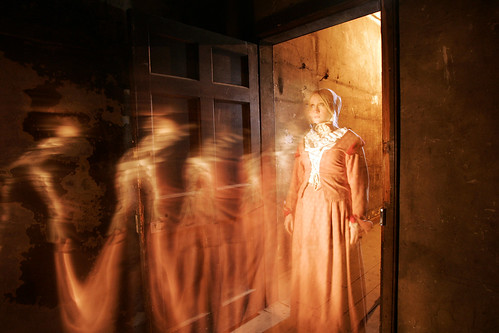 In ‘real’ life the good doctor works for Mary King’s Close, and I said a few things about it. Like me not wanting to have a look round, because of the plague and also because I might not like the dark and narrow and steep passages. Naturally their publicist Caroline invited me to come and be walked round the place with her, before they open for plague business in the morning. I said yes – having been promised I could escape whenever I wanted. And then I was felled by migraine and couldn’t go. And then when I thought about it again, on the other side of moving house, I decided it’d be a bit forward of me to email and ask if I could come now.

Luckily, Caroline sensed this and emailed me to say it was high time we did this. (She did use more finesse than that in her choice of words.) I decided to face the plague there and then, so the resident IT Consultant and I got up really early one morning last week to get to MKC for nine.

(I, erm, went to the Ladies on arrival. The WC screams as you flush. Thought you might want to know. It’s a little disturbing.)

We set off down the first set of stairs and I paused a bit to see whether I wanted to freak out and panic a little, but came to the conclusion I might be all right. And I was. The hardest thing was how steep the actual close is, and you want to mind your head in places, even at my modest height. 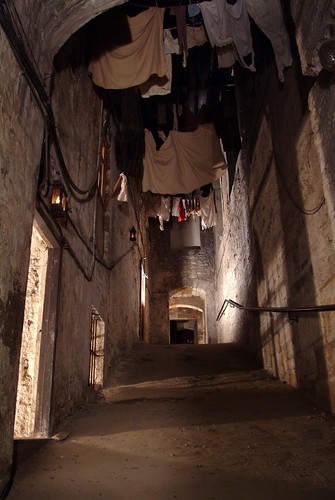 It’s interesting to see how people used to live. So close together, in small rooms with low ceilings and extremely basic facilities. Cooking, sleeping, using the toilet, looking after cattle. No wonder the plague did well under such circumstances.

Usually visitors are taken round by guides, dressed as real people from those days. Caroline seemed to feel she wasn’t as good as the regular guides, but she did marvellously well. We could stop as and when we liked. MKC was home to people of all sorts. Not just the poor, but also to better-off people, some even with their own front door. (I liked the chap who was so proud of his toilet that it’s the room you see immediately from the street entrance.) 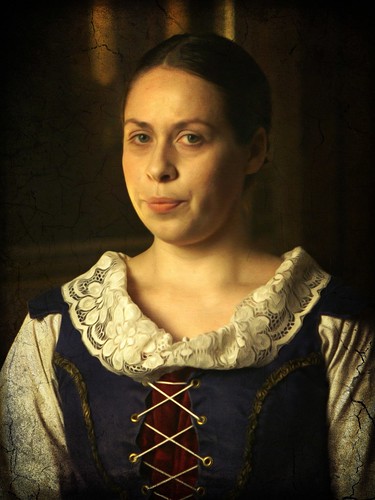 We came upon a woman who’d just murdered her son-in-law (he had it coming). We met Mary King herself, and a couple of her neighbours. They could talk, so we found out a fair bit about them. And we saw the room with all the toys; beanie babies and Barbies and goodness knows what. It seems there was a sad ghost girl who’d lost her doll, and now she has something to play with again. 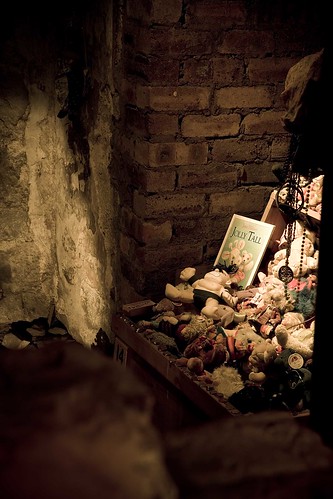 People would hang their washing out, high above the close. And unlike when we were there, the close would be full of stalls and people shopping. We could hear them, but not see them. But the worst was seeing the people who were sick, and the Plague Doctor at work.

After our fantastic private tour, we had another look at the model of MKC in the shop, to see where we’d been. We looked at what else the shop had, including plenty of copies of Philip Caveney’s Crow Boy.

MKC also put on events, and as part of their Close Fest, which runs for a week from Halloween, there will be a sort of talk by Arran Johnston on November 6th at 19.30, A Close Encounter With Charles Edward Stuart. I think it might be in the cowshed… 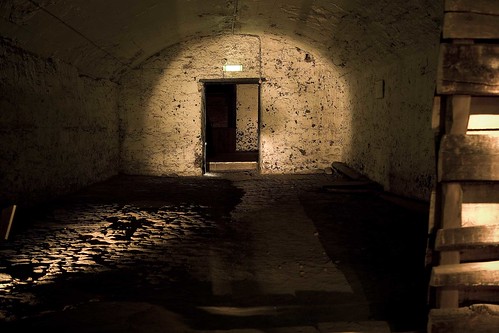 Afterwards the Resident IT Consultant and I felt we needed elevenses, as we’d had such an early start, and we went to the St Giles Bar & Café just round the corner. We felt the name had a nice ring to it, somehow.