Tim Bowler’s latest book, Night Runner, is absolutely normal, by which I mean it’s got none of the supernatural that he is so well known for. It was almost a relief. Sometimes I’d rather be scared by ordinary decent mean-ness than by the inexplicable.

And you certainly are in this book. Tim has come up with some really nasty characters in Night Runner. 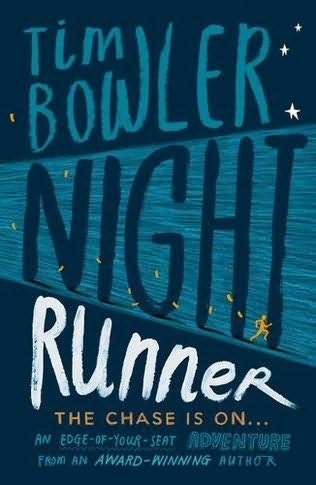 Zinny knows his parents are involved – probably separately – in some funny business. He just doesn’t know quite what. His mum seems to be having an affair, and his dad is never at home, and when he is, he is violent. Not popular at school, Zinny has no one to turn to when things go even more wrong.

Not that he would, anyway. And I think that’s what this thriller is about; the fact that teenagers don’t necessarily share the bad stuff that happens to them with anyone, even if they have a sympathetic headteacher. Instead they attempt to sort things out on their own, and end up in a worse pickle than before.

This happens to Zinny. The wrong people tell him to do things, or else.

In the end you almost agree with poor Zinny; things are so bad that it won’t matter if the worst happens. Almost.

Very, very exciting, and without a ghost of a ghost.