Jellybaby corpses and other gruesome stuff

Last time I went to Waterstones Argyle Street (Glasgow, for those of you who don’t know) was to talk to John Barrowman. That was nice. Two and a half years later I returned to launch Kirkland Ciccone’s second novel Endless Empress, only to find that in the corner where John’s fans had queued, someone had built a café. Very nice (but where will they queue next time?). And toilets (where the interview happened…). Also very nice, not to mention convenient. 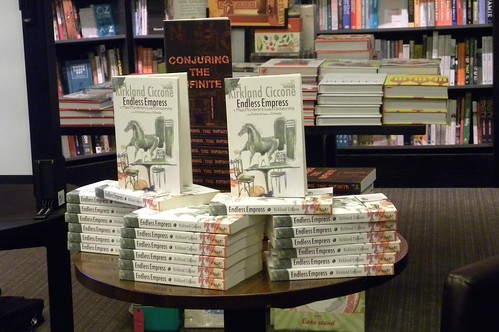 Where was I? Oh, yes, launching Ciccone’s book. (I might have told you already how disappointed I was when I found out that’s not his real name. Well, last night I discovered he doesn’t know how to pronounce it, either.* Or, his publisher and editor – Keith Charters – doesn’t. Might be a Cumbernauld thing, I suppose.)

So, there we were, about to launch. He has lots of friends, that Kirkland, and many of them were there. It was probably the most uniformly aged audience I’ve come across, outside schools. 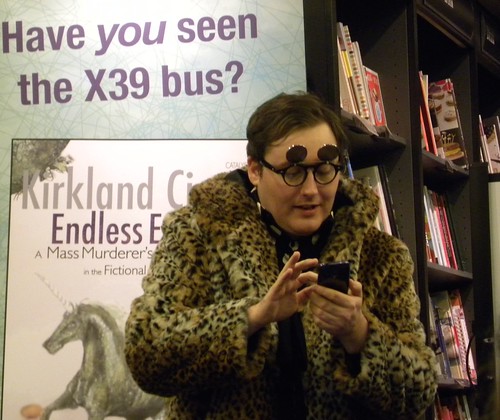 He wore dead leopard. Fake dead leopard, I hope (it looked a bit cheap, so it probably was), and it made him unbearably warm, which is why Kirkland had to take it off as soon as he’d stopped his crazy talk. 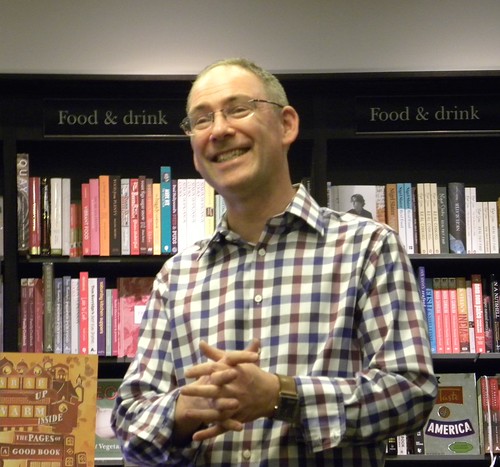 Kirkland was introduced by Keith, who reckons his author is the funniest thing since sliced bread. When editing the book, there was always something new to discover on every read-through.

Endless Empress had a few provisional titles before it became EE; Dead Teenagers, Enkadar, Bombers, The X39 Is Late Again, and finally Endless Empress. Kirkland doesn’t want to write normal YA books (I can well believe it) and is hoping to prove himself to his old school. Or was it teacher? He’s a ‘pop culture sponge’ who listens to what people say in queues.

He cried when he had to read Women In Love at school (Cumbernauld, again). We were entertained by tales of his crazy, chainsaw wielding neighbour, as well as talking bushes (a flasher who mistook Kirkland for a girl), and women crying by the ice cream van. Kirkland doesn’t like Thomas the Tank Engine. 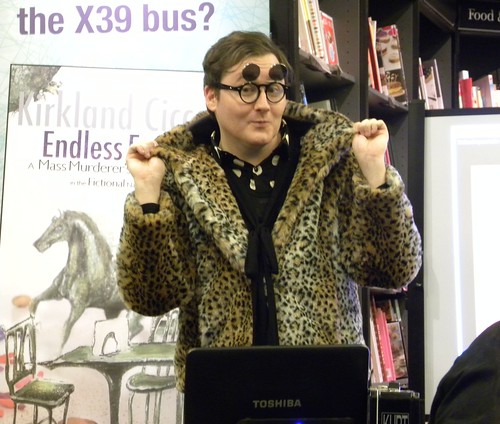 At one point in the pre-publication days he worried that the book might be too realistic. He felt that the high school massacre he wrote about almost came true. And his Elvis impersonator killer did too.

Kirkland wanted a really cool and edgy cover. Keith got him art student Ida Henrich, who has made a pretty spectacular cover, despite the fire at the Glasgow School of Art. 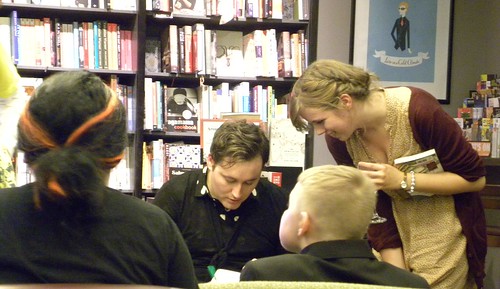 We got the Spanish holiday story again. His mum took him to Spain on holiday when he was a child. When he was invited to the Tidelines book festival in Saltcoats last year, he discovered that Saltcoats had a lot in common with Spain. In fact, it was Spain. Like many good mums his mum pretended a Spanish holiday.

This camp – not manly – author is of the YA generation. He was terribly excited to have been invited to lunch with Julia Donaldson and Theresa Breslin (except it seems he was incapable of going to the right restaurant). Kirkland finished by saying he hoped people would like Endless Empress as much as he loves it himself (quite) and that £7.99 might seem much, but it’s the price of two coffees and a muffin. Apparently. 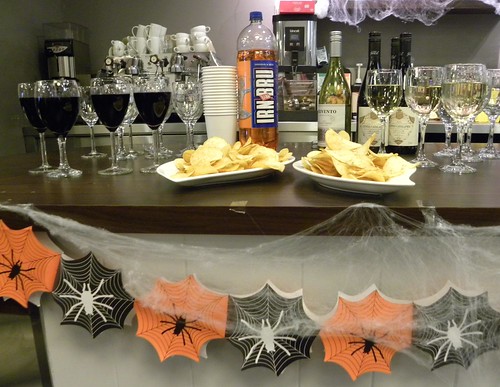 Then there was Irn-Bru and wine and jellybabies (which look like corpses, or some such thing). I’d been promised Coke. What I got was Waterstones water with Waterstones ice.

What happened to my Coke?

*Mr Ciccone has since pointed out to me that he does know how to pronounce his own name, although of course it isn’t his name. He simply borrowed it off some woman.

3 responses to “Jellybaby corpses and other gruesome stuff”