For once I find myself speechless on this blog. And considering it’s while we’re on the subject of a dictionary, this ought not to happen. Let me just say that the Resident IT Consultant has some – mostly – wise things to say about the dictionary I have permitted him to play with for a few days. Over to the man who can think to look up words like chi-squared:

“Who needs a dictionary in these days of instant access to infinite amounts of information? HarperCollins obviously believe somebody does, because it has just published a 12th edition of its Collins English Dictionary – CED – which now becomes the largest single-volume English dictionary in print with 722,000 ‘words, meanings and phrases’, including 50,000 new ones, spread over 2,300 pages. 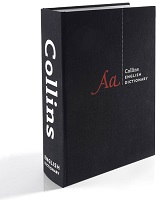 Despite its size CED is surprisingly easy to use. It’s slightly smaller than previous editions and weighs less (2.6kg). It’s attractively bound in black cloth, with no dust jacket to get torn. There’s a ‘virtual thumb index’ printed down the outermost edge of pages which makes it easy to navigate to the right section. And the typeface has been specially customised for the dictionary making the pages remarkably easy to read given the tremendous amount of information that has been crowded onto them.

But back to my question. What’s the point of a dictionary today? If you need to find the meaning of a word, why not simply look it up on the Internet, in one of the many crowd-sourced dictionaries such as Wiktionary, or in a commercially provided Internet dictionary (Collins, Oxford and Chambers all do one)? Alternatively you can simply Google the word and discover for yourself how it is used.

One answer is authority. If you need a quick and reliable answer to a question a dictionary may be best. For example, if I’m reading C.P. Snow’s Two Cultures and I quickly want to know what the second law of thermodynamics is, I can find an impressively clear and succinct definition in CED (so long as I know to look under ‘law’), written in only 32 words and understandable to a layman. I could get this information from the Internet, but it would take more effort, even if I went straight to Wikipedia.

I sometimes do a bit of proofreading and often find myself referring to a dictionary to check my understanding of correct UK English. Should it be ‘Internet’ or ‘internet’? ‘Inquire’ or ‘enquire’? ‘Sulphur’ or ‘sulfur’? If I were willing to place my trust totally in one dictionary, or to declare that this was what I was going to do, then CED would enable me to answer these questions quickly. Sometimes though, the answer is more complicated and I still need to research the reasons behind the differences on the Internet. And of course I could still look up the CED entries for these words on the online site, which is free (and seems to have the same content as this printed dictionary plus some extras such as more usage examples and usage trends).

I was impressed by CED’s coverage of scientific terms which clearly reflects its extensive list of specialist consultants. The entries for Bayesian, eigenvector, continuous, Taylor Series, Coriolis Force and chi-squared test were all models of clarity and succinctness. Scottish terms are reasonably covered. I can find bridie, bannock, clootie dumpling, neeps, tattie and tablet. Auld Reekie is there, but not the Granite City; the Mearns, but not the East Neuk. Wee Frees, but not the Highland Line.

I went hunting for words that I felt should be in the dictionary but weren’t, and the strongest contender I could find was descope; to change the scope of a project in response to an expected failure to meet budgetary or timescale constraints. Personally I’ve used this word since the late 1990s and you can find instances of its use from the BBC, the Guardian and Hansard from around 2000.

But I think the real strength of the physical dictionary over its electronic equivalents lies in the experience of using it to browse. There is something about the feel of the book and the ability to scan two pages of content at one glance that cannot be matched with a screen. For example, on looking up shellac (because I am currently painting something with shellac primer) I find, on the same pair of pages: 1) that while the word shemozzle comes from Yiddish, the origin of shenanigans is unknown (I had always assumed somehow that it was Irish); 2) an account of the differences between the role of a sheriff in the USA, England and Wales, Scotland, Australia and New Zealand and 3) a surprisingly concise and comprehensible definition of an electron shell.”

I just have to say this; I like the number 722 (with or without thousands). Not so sure about eigenvector… And it is a rather elegant looking volume.

One response to “Collins English Dictionary”