In this case, Liverpool’s libraries. If I’ve got it right, then the Mayor of Liverpool got himself elected saying how much he was in favour of supporting libraries. And now he wants to close 11 of 18 in the city.

In fairness (?) the government has taken away a lot of the money the council needs, for everything. But 11 libraries is a lot. It’s probably the future of Liverpool, and if you were to take this to more places, it might be the future of the country.

Alan Gibbons and Cathy Cassidy have thrown themselves into the fight to save their home city’s libraries. There is a facebook page for the planned action on November 8th. And I don’t know, but someone (who may be well informed, or a malicious lier) posted this the other day: ‘Despite Joe ‘Bonaparte’ Anderson’s claims that Liverpool City Council is teetering on bankruptcy due to cuts in funding of over £150,000,000 from central government, he still managed to find £173,249 to pay the council’s bill with ‘The Pickled Walnut’ – a luxury caterer.’ 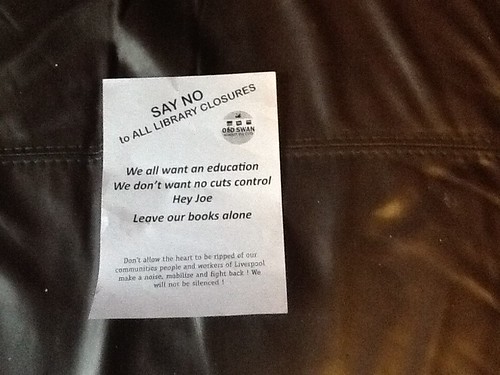 Well, anyway, lots of authors have joined in and have written to Mayor Anderson, pleading for him to change his mind. If Liverpool was the only place under threat, I’d say this was good and perhaps the protest stands a good(ish) chance of succeeding. But Liverpool isn’t alone.

I was struck, too, by how many of the names are those of children’s authors. Could it be they are more aware than their ‘adult’ peers? Is it that their readers are more likely to need libraries to read at all? We are many who are ‘poor’ but children have less say in how to use whatever meagre sum of money which might be at people’s disposal. Or maybe children’s authors are yet again proving they are the best.

On a lighter note, librarians can also be angry. Sometimes literally. I used to read a blog written by one; Arga Bibliotekstanten (The Angry Librarian Lady). She shut up shop a while back and moved to facebook, where she took the persona Arga Bibliotekstanten. The other day facebook closed her account because no one can be called Arga. So she had to become Anna in order to continue entertaining us with her librarianly woes. How can anyone decide what is a name, and what isn’t? Some people have weird parents. Others simply have weird names.

And they had no problem with Bibliotekstanten. Apparently Library Lady must be a regular surname. Somewhere…