The Case of the Exploding Loo

Do I strike you as a witch who’d be offended by exploding portaloos, or mentions of poo?

No? Thank you. Unless, of course, the exploding loo means one is caught short. 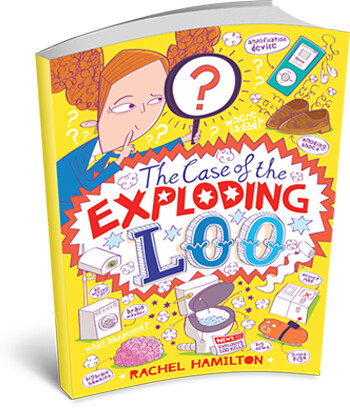 Anyway, a book that is both humorous and has a Faraday’s cage as part of the plot, can not only not be bad, but must of necessity be pretty good. The Case of the Exploding Loo by Rachel Hamilton (she’s the one who worried about offending my sensitivities) is silly, but fun.

Noelle’s scientist dad has disappeared in an explosion in a portaloo. The police reckon he is dead, as they could only find a pair of smoking shoes, but his daughter is set on solving the puzzle and starts an investigation. She phones the police so often that they want to scream when they hear her voice.

But someone has to find her dad, and it clearly won’t be the stupid police. Sort of aided by her older sister Holly, Noelle uses her very high IQ to come up with ideas. Their mum has gone bananas, and life in the Hawkins household gets stranger every day.

She is perhaps not so skilled socially as Holly, but Noelle still finds lots of clues missed by the police. And with the help of a portaloo fan, some meccano and an old police retainer, they discover the weirdest things.

Read, if you want to find out. Might help if you are young of mind, like I am. Poo.