When Sophie Hannah was talking at Bloody Scotland about growing up with Agatha Christie, it was like hearing myself speak. Or it would have been if I could sound as intelligent and articulate as Sophie. And I wished I’d known this ‘sister’ back when I was twelve, except at the time her mother Adèle Geras was barely out of university herself, so Sophie and I were never destined to be the same age at the same time.

Also, we wouldn’t have had a language in common. It was more our behaviour and reading patterns that seem to have coincided. I’m pretty sure I didn’t go to school with children who read Agatha Christie at twelve. If I had I might not have felt like a freak.

And if there was a likeminded child at school, I’m reasonably certain they didn’t read Agatha in English. (This peculiar habit of reading in a foreign language really only took off with Harry Potter.) Mrs Christie was my English mentor/teacher. If not for her, I wouldn’t have tried. And I suppose I wouldn’t have attempted it if first I’d had to go to the library to check out their foreign langauges section. It helped that Mother-of-witch had a few Christies in the original; leftovers of her own attempts at educational improvement. So I could test drive them to see if it would work, and it did. Reasonably. 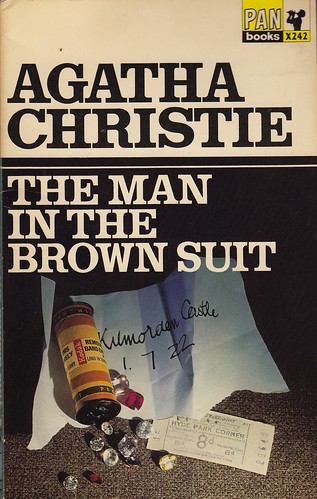 I was going to ask the rhetorical question of whether I’d be blogging right now, were it not for Agatha Christie. But my question has to go deeper than that. Not to be blogging wouldn’t be the end of the world (I mean, if I’d not started, I’d not know what I was missing). But would I have come to Britain to live? There would in all likelihood not have been a Resident IT Consultant. Or Offspring.

Perhaps Agatha wasn’t so much my English teacher, as my life designer. Not that she knew, but still.

It’s extraordinary what an early exposure to niblicks will do to a little girl.

3 responses to “My teacher, Mrs Christie”