How I have waited for ‘the next’ Michelle Magorian novel! And here it is, and it is absolutely perfect and well worth the six-year wait, and I love it! (No apologies for the exclamation marks. There is one in the title of the book, too, and I’m not sure I understand the title. I might have missed something.)

Impossible! is a continuation of the theatre saga featuring the Hollis family from Cuckoo In the Nest and A Spoonful of Jam, as well as blending in with the Carpenters from Just Henry. I just love re-visiting old friends! Ten years on from Henry, we meet Josie Hollis, Elsie’s baby sister; the little girl born at the end of Cuckoo In the Nest 12 years earlier. And what a girl she is! 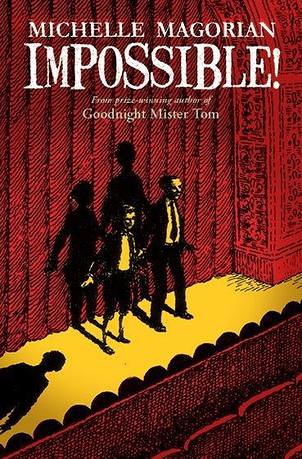 Josie has just started stage school, and is living with her Auntie Win in London. She misses her family, but desperately wants to act. But somehow it seems as if her school doesn’t want her to. They obstruct her every step. (Between you and me, they turn out to be a useless bunch, in more ways than one. But fear not.)

Struggling to make friends and to survive her school’s rules, Josie still lands some acting parts, before she is kidnapped. It’s a case of mistaken identity, and she has to be very brave.

This book is also a tribute to (the real) Joan Littlewood’s theatre company, and it’s where Josie ends up when she’s on the run from the baddies. It’s where she learns what acting should really be about and her life changes totally, again.

You can tell that Michelle knows her theatre/film/acting world, and also that she knows exactly what life in 1959 was like. This is a wonderful adventure as far as the kidnapping drama goes, and a marvellous tale of life on the stage and on the screen, big or small. The dreaded ITV was in its infancy, and it wasn’t the done thing to watch it. I guess Michelle did anyway, just like Josie.

There is no need to be interested in acting. The story will make you want to know. As far as I’m concerned it could have gone on for a few hundred pages more than the 600 it is. This is feelgood excitement of the very best kind.

(Impossible! was published last month, right on cue to celebrate the 100th anniversary of Joan Littlewood’s birth. I wish she’d been here to read it.)