Charlie in The Bubble Wrap Boy by Phil Earle is small. Very small. It causes a considerable amount of embarrassment in most situations in his life. But this 13-year-old is determined and courageous and very funny. He tells of all his daily mishaps in a wry tone, that doesn’t demand pity.

He has no friends. Well, he has Sinus (Linus, really), who is friendless because of his enormous nose. Also, he stares at walls. In addition, Charlie has parents, and his mum interferes with everything he does. If she could, she’d cover him in cotton wool, and never let him out of the house. Charlie’s dad runs their Chinese takeaway, and prefers not to get involved in his wife’s decisions. 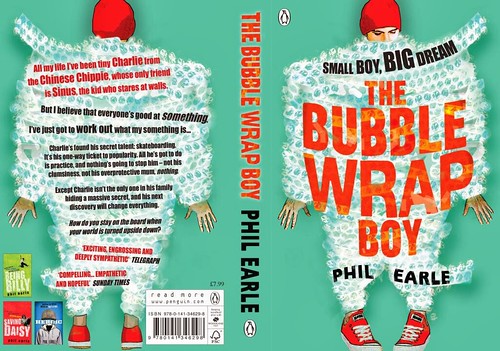 After a lifetime of causing havoc wherever he goes, Charlie discovers the one thing he could love. Skateboarding. It doesn’t go so well with his mum’s cottonwool ideas, though. But after she discovers what he’s been up to, Charlie discovers an even greater family secret. (And it was one I’d not been able to guess at.)

So, he’s left to try and solve this new massive secret, while also wanting to retrieve his skateboard and his skating. He’s only 13, so some of his ideas aren’t so good. But you get some marvellously comical scenes as he and Sinus investigate The Secret.

There is a lot of sadness behind it, but you can’t beat the exuberant optimism of youth. Phil doesn’t resolve this unexpected secret in the way the reader might hope for, and that’s very brave of him.

Tears and smiles, and giggles, and quite a bit of skateboarding. Terrific story.

This entry was posted in Authors, Books, Reading, Review and tagged Phil Earle. Bookmark the permalink.