At five past nine yesterday morning, Waterstones in St Andrews had still to discover what lay in store (pardon, that was a little wittier than intended). That’s because Kirkland Ciccone and his travelling mate Theresa Talbot, along with their publisher Keith Charters, were running a wee bit late. 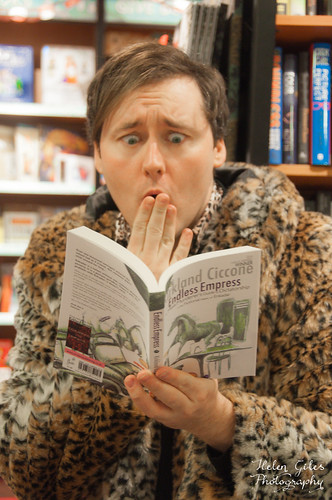 Hardly surprising, considering their 6.30 start (from Glasgow, I’m guessing) to drive to all the Waterstones in the country in one weekend. Now, I know you will say that’s impossible, and it is. First, the country is Scotland, not the UK, and second, I don’t think they meant quite all the Waterstoneses. My branch, and that of some of the larger towns were not part of it. We get our share later. Apparently. More far flung branches may well remain unvisited, at least for some time.

But anyway, on Saturday they went to ten shops, in Fife, as far west as Falkirk and to all those branches in Edinburgh. In fact, had Son not very wisely decided to visit the old people over the weekend, he’d have been mere minutes away from this gang. As it was, it was only Daughter who went near the crazy travellers, and she was the one who found that they were already running late for their first shop. 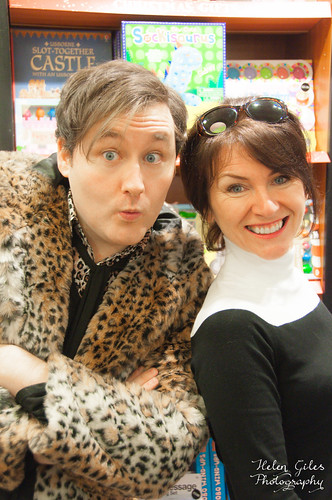 I don’t think we can blame the authors. It’s that Keith who hatches insane plans. He’s done this before, because I have hazy recollections of other people being conveyed cross-country in this manner. But it’s good; it introduces authors to lots of shops in two fell swoops.

Kirkland has – as all my faithful readers will know – written Endless Empress, his second YA novel. Theresa Talbot – about whom I knew nothing a few weeks ago – is famous off the radio and has written about her life, so far, in This Is What I Look Like (because on the radio no one can see you). And Keith is the one who made the books. 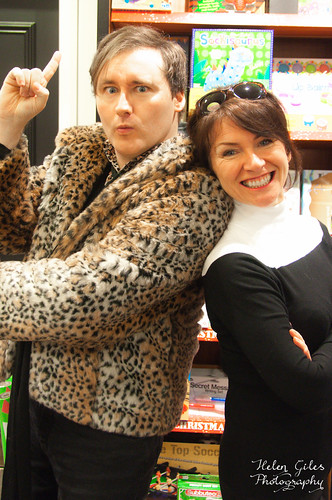 I gather they turned up at 9.15 or something, and Daughter chatted and took pictures, and Kirkland totally charmed her. I had suspected this might happen. Behind the Kurt Cobain lunchbox is a kind and friendly person. Crazy, but those other things as well.

He appears to have worn his delightful little leopard number again, and it was a close call as to who was the most beautiful in that bookshop. Which might never be the same again. 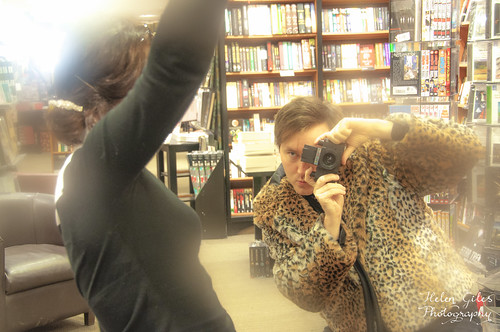 So there you are, madness on the road. And while you read this as part of your peaceful Sunday, spare a thought for the six Waterstones in the Glasgow area who are about to be visited today.