Wonderfully weird, would be a good way to describe today’s Book Week Scotland read. Those of you who have already read my snippets about Kirkland Ciccone on here, will not be surprised to hear my opinion of this crazy author’s second novel. In fact, you will probably have suspected ‘the worst.’ 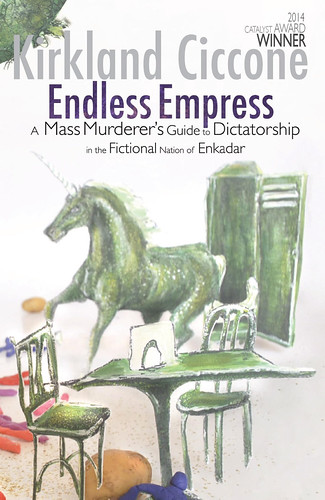 Perhaps better suited to the YA readers Kirkland had in mind, than us oldies, it’s still fascinating and will potentially give us an insight into the warped minds of some teenagers.

Or are they warped? I don’t know. Maybe this was all a game, and perhaps there really wasn’t a crazy ‘Empress’ who enticed a gang of mid-teens to kill most of the students at their high school. You can’t be certain. Perhaps the Empress played with their minds, or is Kirkland playing with ours?

Beware of lunchboxes! And as I say that, I can’t get Kirkland’s Kurt Cobain lunchbox out of my head. I don’t want to know what’s in it. Or maybe I do. Just to make sure.

This is the slightly confusing story about a group of six teenagers who believe in the fictional state of Enkadar, and who hate the other children at school and want them dead. Or their Empress does. Set a few years after the bomb at their school went off, the tale weaves back and forth between then and now. It’s occasionally hard to know where you are, and when, but I guess that’s the point. Keep everyone on their toes.

I noticed that looking back to the first pages, you find lots of hints of what is to come. It’s quite obvious, in fact. And chilling.

There could be many teenagers who will identify with the feelings of the Empress. I just hope they won’t do what the characters did. And do.

And don’t eat the sandwiches!

One response to “Endless Empress”