The Lure of Elizabeth Laird

It might have been a dreich November night, but my route through Edinburgh from Waverley to Blackwell’s took me through the Christmas Market in Princes Street Gardens to the Scottish National Gallery (no I was not lost) and up the hill past the charming St Bookwitch Street and St Bookwitch Cathedral, and slightly down again (such a waste of the uphill!) to my event with Elizabeth Laird. To be perfectly honest, I’d forgotten what it was to be about, but that doesn’t matter when it’s Liz. It will be good. And it was.

The event was for adults, which was lucky, because last night Elizabeth used rather more adult language, if you know what I mean. You also needed to know your Bible well, so I was on slightly shaky ground. 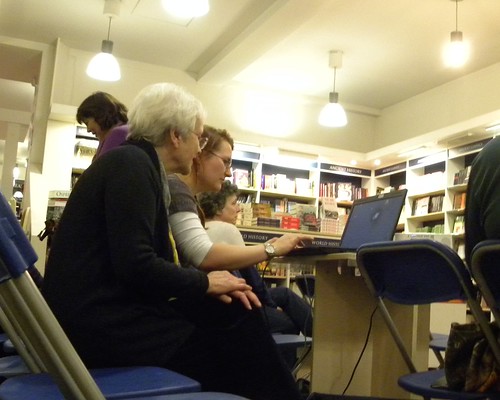 I was early (no surprise there) so was able to hog a corner of the sofa, and when I remembered I’d forgotten to eat my sandwich on the way, I asked for and was granted permission to eat. There were mainly women in the audience. Perhaps that’s as it should be, since Elizabeth reckoned it was the women in Ethiopia who had the best stories to tell.

She said that she was going to ‘drone on about Ethiopia’ and we should interrupt if necessary. Her book The Lure of the Honeybird, began when Elizabeth returned to Ethiopia in 1996, after thirty years away. There was an encounter with an ‘ant motorway,’ and a farmer telling her a marvellous story about ants. 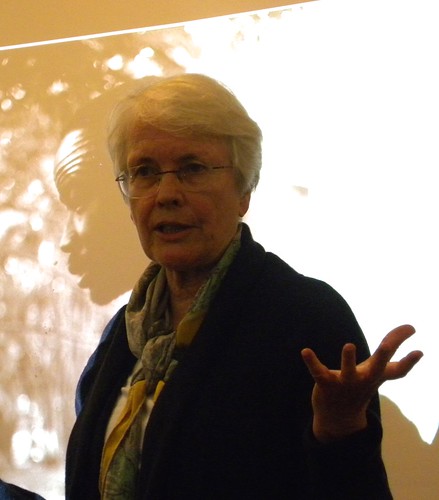 Elizabeth promptly forgot how the story went, but she came up with an idea, and she talked to the British Council and demanded a Landrover and an interpreter so she could travel and learn new stories and write two books. This was deemed to be such a good idea that a demand for 24 books was made, and Elizabeth found herself travelling round the mud and the bureaucracy with a driver and an interpreter.

Many of the stories people told her had a lot in common with the Bible. She reckons they didn’t come from that famous book, though, but believes that the Bible most likely borrowed its stories from ancient Ethiopia. The same thing goes for Aesop, who by all accounts cleaned up the story about the hare and the tortoise. And there was a funny story about the beautiful girl who gets married, and the three ridiculous men in her life…

Because the thing is, Elizabeth told us these stories. She didn’t just talk about how she went about finding them, but showed us her photos, described the people she met, and which of them had an interesting story to share. And she can definitely tell a story! 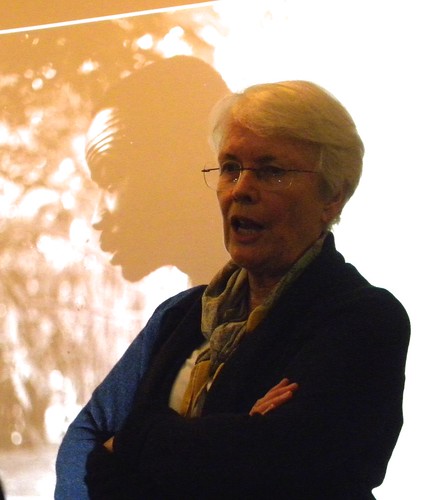 Was it worth risking the lives of her driver, her interpreter and herself for these stories? Yes, she believes it was. Now. Walking through tall grass with pythons and lions on either side wasn’t quite such fun at the time. Nor was driving along a road where only the day before people had been kidnapped and killed.

When she met a group of naked women, far away from anywhere else, she found it difficult to get them to understand what she wanted to hear, so as an example she told them about Little Red Riding Hood (the unexpurgated version) and they all agreed about the unsuitability of walking alone in the woods, and of talking to the wrong man. 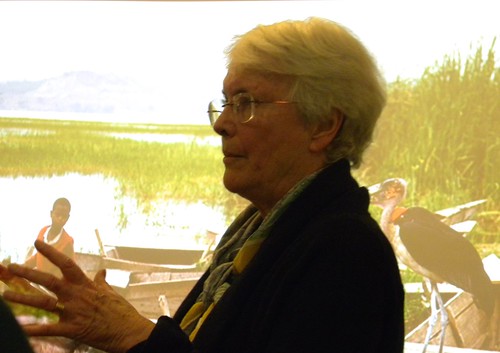 Elizabeth told us many stories from Ethiopia last night. If you want more you can read The Lure of the Honeybird, or you could try these websites, recently set up by Elizabeth: ethiopianfolktales.com and ethiopianenglishreaders.com. Both have been financed with the help of one of her students from the 1960s, whom she just happened to meet in London one day. He’s now a fund giver, which is nice, since so many of Elizabeth’s other students are dead, having turned revolutionaries while attending university, instead of becoming teachers as they were meant to.

You’ll wish you’d been there. Elizabeth Laird is a fantastic storyteller. And she may well have been scared when out collecting the stories, but it’s only the brave who do this kind of thing, and who don’t mind admitting to being frightened. She’s also a beautiful woman, and I have yet again failed to take photos that do her justice. You will have to take my word for it.

One response to “The Lure of Elizabeth Laird”