The Resident IT Consultant has kept up a steady pace all week, so just in time for St Andrew’s Day and the First Sunday in Advent, we have shelves. Not just undercoated, but ‘overcoated’ and filled. 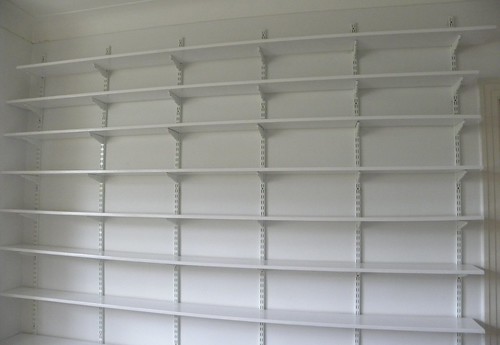 He painted for three days, and then the joiner came and secured the shelves with screws. Except for the one he forgot to do, so that will have to be done on his next visit. 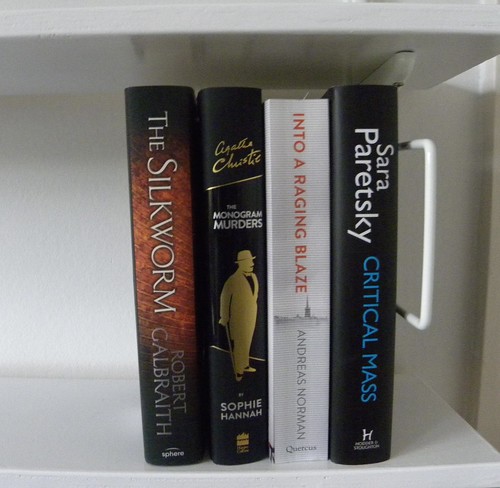 In anticipation of putting ‘all’ the books up, we placed the first few early, as they were hanging around all un-boxed. These are on ‘The Paretsky Shelf’ as we have named the slightly taller shelf for recent hardbacks. New hardbacks are very tall and never seem to fit where other books will happily go. As for Sara, she was pleased to have a home, although she declared it slightly tacky. (I’m hoping that’s the paint tacky, not the tasteless one.)

And the day I swanned off to Edinburgh I left a room full of boxed books, and returned to a wall filled with books. He’s quite useful that way, the Resident IT Consultant. He even made time to pick me up from the station.

My heart is flowing over, and so, obviously, are the shelves. They are generous, taking up a whole wall. But that is never enough, is it? There will, eventually, be more shelves in other rooms, but each step has to be done in the right order. I estimate at least two more months before the next worthwhile contribution to our shelving issues. 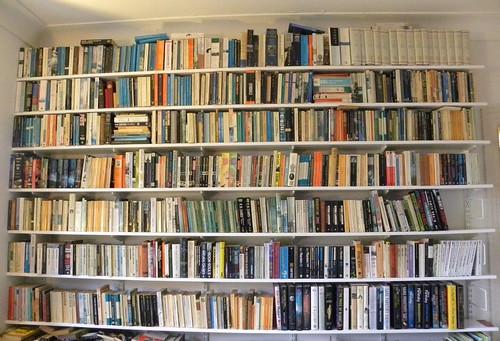 We spent the following day placing the newly released books in a more orderly fashion, while also pruning quite a bit. I was being very good, sacrificing all my Ann Grangers and my remaining Wycliffes and some of the Ed McBains.

We gained a little more space by moving some books to the shelves in the alcove, which until this week had held a number of completely irrelevant items. 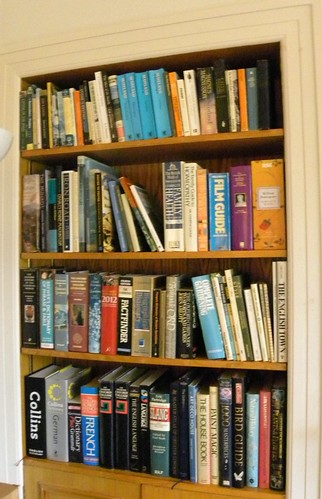 We’re slowly getting there. Thank you for your time!