No pigs were harmed in the making of this Christmas blog post. Our pigs in blankets were all veggie, and pretty decent. The ham was pretend as well. Perhaps more ‘faux’ than pretend, as we did actually eat the ‘ham.’ 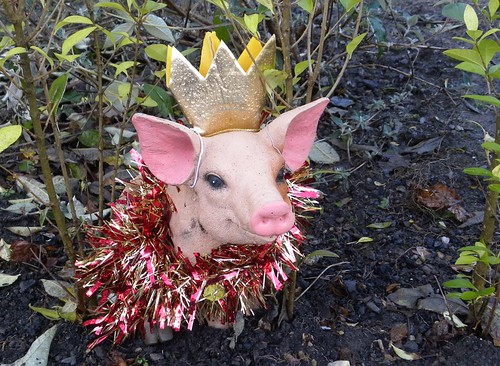 The other evening the Resident IT Consultant encountered this little piggy sitting stock-still in the glare of our car head lights. Even in the bleak light of day some hours later the pig didn’t move. He appears to live in the hedge diagonally across the street from us.

He has been enhanced (by whom?) with both a golden crown and multicoloureed tinsel, and what more could a pig ask for? Not a blanket; that’s for sure. In that case he’d already be sausage.

This is weird, but rather charming.

This entry was posted in Blogs, Christmas. Bookmark the permalink.