And isn’t it odd how once it would have made me really excited to know it’s Christmas Eve; now that I’m rather ancient it has – almost – lost its allure?

OK, it’s still quite nice. I just have to make the kale soup and we’ll be fine. 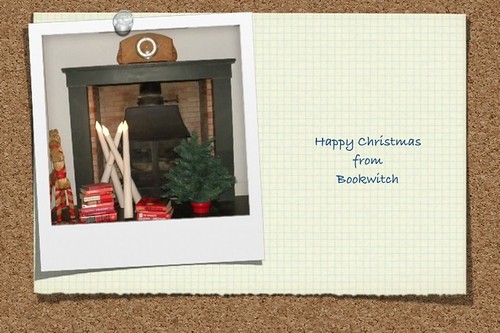 It’s a bit Famous Five meet Wuthering Heights, set on Sheriffmuir just above Stirling. I’d saved Alex Nye’s first novel Chill until now, as it’s set over the Christmas holidays, and her characters have been snowed in (and can’t get to school once term starts…) and find themselves embroiled in a ghostly past.

Samuel and his mother have moved from Edinburgh to a rented cottage at Dunadd, and their landlady is Mrs Morton in the ‘big house’ where she lives with her three children, after Mr Morton seemingly died of fright a few years earlier. 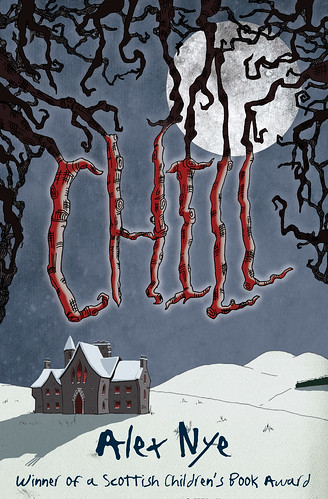 There’s something strange going on; a weeping woman, and a female in a blue dress can be seen looking out one of the windows on occasion.

Samuel and Fiona Morton get on well and they try to find out what it all means, while Fiona’s two older brothers are pretty unfriendly, albeit for a reason. There might be a curse on the Mortons, and Fiona and Samuel want to find out why, and how to set things right, but have been forbidden by Mrs Morton to do anything of the kind.

Alex Nye used to live in that cottage, and she was there during the big freeze, so she’s got the snowed in on Sheriffmuir down perfectly. The cold and the snow feel most atmospheric, and go so well with the chilling memories from the past that refuse to go away.

I would have liked to know how old Daisy is. At first I assumed maybe 14, but Shirley Hughes’s illustrations suggest someone much younger, so I suppose it’s my 21st century sensibilities that want Daisy to be older, so she can go out to work. 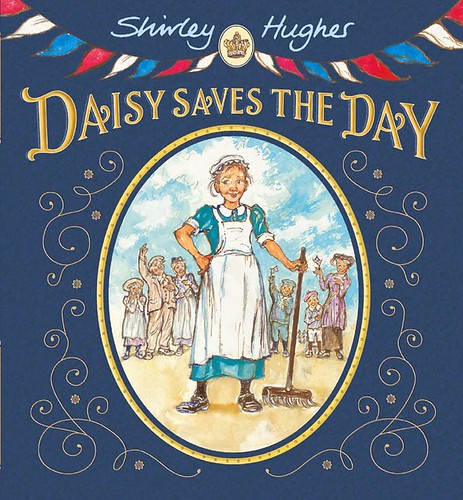 Let’s make a guess and say she is eleven and the whole story becomes much more heartrending. (And it was already rather sad.) Daisy lives with her mother and two brothers and they are poor. It’s the beginning of the 20th century and even though Daisy does well at school, she needs to go out to work, which in this case also means she has to leave home and go and live with two rich old women, and their surly servants.

She’s not good at housework, and she would love to have some fun in her life, like reading books and seeing the coronation of George V, along with everyone else. Her young age will explain how she offended her employers, which made her life harder still.

But Daisy is a heroine, after all, so a change is coming…

It was a successful party. I think. Only 20% of the guests slept through it, which might indicate we are rather scintillating company?

For the first time since 1972 I live in a town where there are relatives nearby. In fact, it was only for four years last time, and I loved it. The idea that you could see family without first travelling for a couple of hours was just great. So now that we have a few relatives in the same town, I took advantage of it and press-ganged them into coming round to Bookwitch Towers for funny foreign food.

I obviously didn’t tell them that. They discovered when they got here, and after cautious beginnings, they demolished the Temptation, and ate the beautiful French cheese (all the way from St Andrews) with a teaspoon (that’s one spoon each), as it was pretty runny by then.

The sleeping was mainly to do with the discussion of limited companies and sole traders and accountants. It’s the kind of thing this lot of relatives will talk about, unlike the ones from forty years ago. But they are all nice. Some of them offered to give the Grandmother a lift home, which spared her the – relative – indignity of being returned home in a wheelchair.

And we have food to last us a little while…

Let there be light. And heat. And possibly food.

The kale quiche (I know, that’s not kale soup. I will get to the soup later) was barely started, but started enough for it to be annoying, when the lights went. And the oven and the iPod in its dock and the heater in the ‘Ice Cube’ and lots of other electrical goods. The Resident IT Consultant had phoned ahead to ask for coffee to be made, and I assumed it was the coffee-maker at fault. 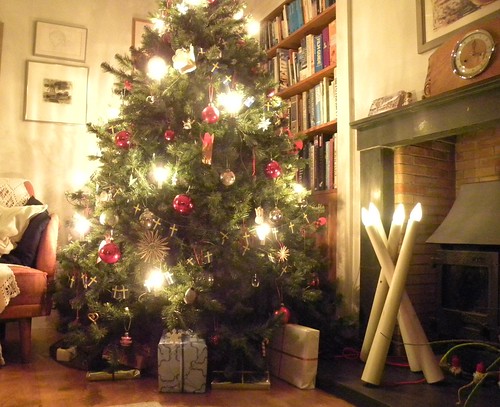 But when he got in and had to find the torch (very conveniently placed behind a Christmas card so he couldn’t see it) and go and peer at the fuse box in the garage, it wasn’t at all clear what had happened. We had our elevenses, as the electricity went again. I said we might as well enjoy it while the drinks were hot, and we’d be in a better mood to go peer at those confusing circuits afterwards. (We have one circuit labelled immersion heater. We don’t have an immersion heater. Hardly surprising it’s not working.)

We still don’t know what is wrong or why, but we have slowly got most of our modern day essentials working (touch wood).

The funny thing was that the treelights were fine, and the further away from the kitchen you got, the more normal things were. We are the third household in the Witch clan to experience a mysterious kitchen-based electrical problem in a short period of time. I say it’s a curse.

The Nights Before Christmas

This gorgeous, large volume of collected Christmas classics, illustrated by Tony Ross, contains 24 stories, poems and extracts from wellknown books. As anyone can work out from that – apart from me, initially – you have one thing to read for every night through December. In other words; the best kind of advent calendar. 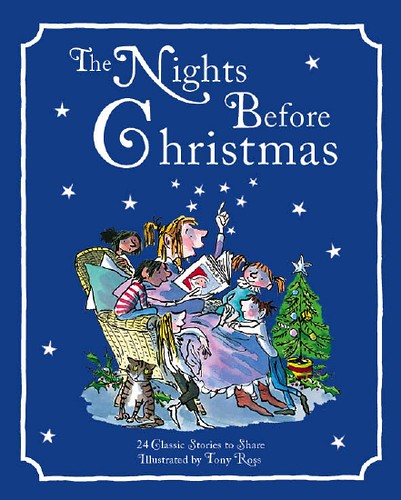 There’s material you will already know, and hopefully brand new reads as well. I used to read The Little Match-Seller over and over as a child. It’s so very sad. And then there are things I didn’t know at all, like the fact that Christina Rossetti wrote In the Bleak Midwinter. That was a revelation.

You get extracts from Little Women and A Christmas Carol, and there are many tales about Christmas trees in various forms, and shoemakers seem to be big, too. The Bible and the hymn book both feature, as do Oscar Wilde and Mark Twain.

I believe I always say this about anthologies and collections, but I do hope it will lead today’s children to investigate some of the classics. There is more to Christmas than farting santas. This is a beautiful book, suitably ‘modernised’ by Tony’s pictures.

Next year I will begin reading on December 1st and I will enjoy every step of the way.

This thriller by Lari Don just can’t end well. And in a way that’s a very good thing, because life isn’t like that. All you as the reader can hope for is ‘not too bad.’ At times I didn’t think that was going to be possible, either. 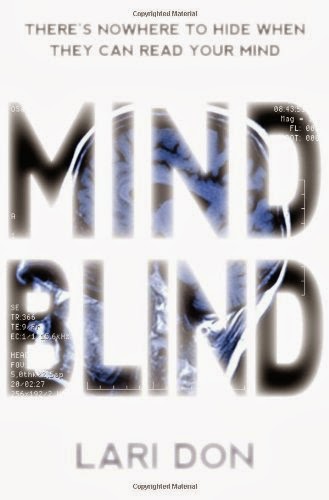 Lucy’s sister Viv has just been murdered. While he didn’t actually kill her himself, Ciaran caused Viv’s death, and it was his family who killed her. Actually murdered her.

They seem like a bunch of psychopaths, and what they can do is read minds. That makes hiding from them or deceiving them well nigh impossible, but Ciaran tries, and he drags Lucy into this nightmare as they try to sort things out. Except things aren’t really of the sortable kind.

Very, very exciting, and the reasons behind all this cloak and dagger stuff makes for good thinking material. Sometimes you need to stop and consider the moral aspects of what people do.

This is your classical chase, but with a twist. It’s weird and dangerous, and there can be no happy ending. You still hope, though.