This is, quite simply, a very lovely book. I missed Maria Parr’s Waffle Hearts when it was first published, and am so glad to have caught it now. It was lying around when Son was visiting and he picked it up and informed me it had been translated by his friend (Guy Puzey), as though I ought to have known.

I’d never heard of Maria, either. Seems she’s big in Norway, and Waffle Hearts is the kind of book that has won a lot of awards, except we haven’t heard of it here. But think Astrid Lindgren and The Six Bullerby Children, and there you have it. 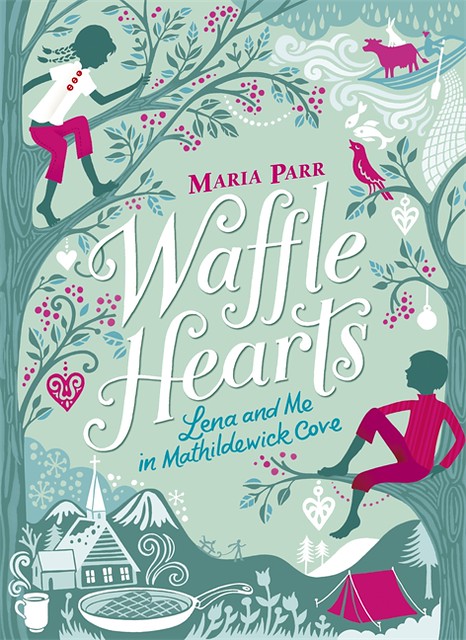 Set in Mathildewick Cove, somewhere near the sea in Norway, 11-year-old Trille (he’s a boy, before you go getting the wrong idea) lives with his family and relatives in this small hamlet. Probably smaller than a hamlet, actually. And next door lives Lena, who is his best friend. She is a bit crazy, and life is a lot more exciting when she’s around. It’s just that Trille fears she doesn’t like him as much as he likes her.

Each chapter features a new, mad idea Lena has come up with. They are not Pippi Longstocking stuff; just simple little things a child might think of, and which nearly always land the two children in some hot water, with someone or other of the family. Like the day they played Noah’s ark on Trillle’s uncle’s boat. You can imagine. Or when they advertised for a dad for Lena. (Easily confused with a puppy.)

There are waffles. The best in the world, made by Trille’s lovely great-aunt. Her brother, Trille’s grandpa is a wonderful kind of grandpa. Lena gets concussion rather a lot, and there is much scope for things going wrong when you toboggan across roads. In fact, ‘don’t try this at home!’

It’s not just sweetness and old-fashioned happiness, however. It gets sad, too. Really sad.

You’ll want to read this, even if they do spread butter and sugar on their waffles.