Whenever I think of the run-up to my interview with Debi Gliori (almost six years ago!) I feel ashamed. Ashamed, because she wanted to feed Son and me, and I gave her a very long list of what not to give me. In a way it doesn’t matter. As I made clear last week, I can always not eat the chocolate dessert, but it’s easier not to in a restaurant where I won’t worry too much about anyone’s hurt feelings. But I know that if I’ve slaved over a hot stove to cook something for a visitor, and it turns out to be the one exact thing they simply can’t eat, we’d both have been happier if there’d been a list. Even a long list. 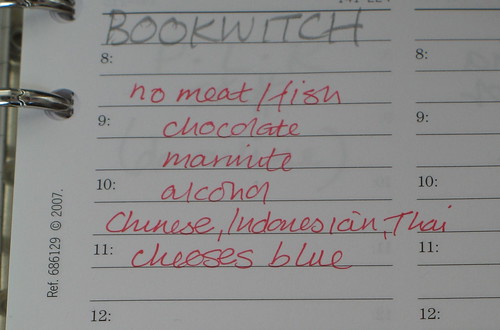 (And in the end Debi went for simple and utterly delicious and I can recommend her kitchen to anyone. Which she might not thank me for.)

But you’d think that when I cook my own dinner I’d know what to do. Or not to do. And I do, but sometimes I have my moments. On Monday I could either have put no onion in the soup, or used a little, frozen, onion. I put lots of fresh onion in instead and didn’t cook it enough, and as a result you are now not reading about James Oswald’s visit to the Stirling branch of Waterstones.

C’est la vie. Sleeping off migraines is all right, too. Apart from my date with James I have the time, so it could have been worse. Perhaps I’ll write myself a list to look at in the kitchen, before I start telling others what to do.

I’m reminded by what Asperger guru Tony Attwood told the audience at a long ago conference I attended. Some people have found they get a bit more ‘normal’ by following a fairly strict diet. Or less ‘aspie.’ Tony was having a meal out with aspie child author Luke Jackson and his mother. Luke followed this diet, so his mother asked for various things to be taken into account when ordering his food.

Tony said that after a while they became aware that Luke was behaving unexpectedly badly. They asked the waitress if any of the things they’d mentioned might have ended up in Luke’s meal anyway. It had.