I spoke too soon. It could be that Son would quite like the hifi somewhere in that room. The – ahem – library-cum-guestroom-cum-firstborn’s bedroom. We’ll have to see.

The much-thrown-about bed has been slept in. It’s the one Son adopted from some people in the Wirral a few years ago, which – on arrival in Edinburgh – proved too large to go down into the tenement basement flat, and which instead was walked round half the block, taken into the tenement opposite, through and out into that ‘garden’ and chucked over the fence into Son’s garden and in. 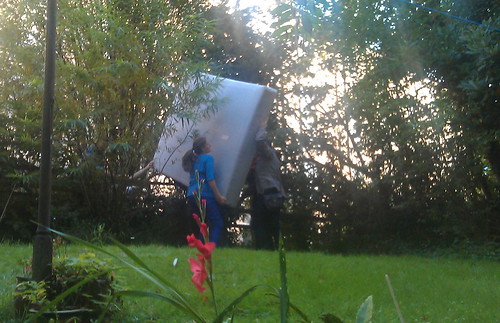 A year later it was similarly chucked uphill back over the fence when it was time to move elsewhere, but at least this had been planned and there were more chuckers.

Another year on and Son sent the bed to us to be his bed in the new bedroom. And because there was a lot of decorating and unpacking needing doing, the poor bed has been shoved back and forth, with no room to call home. Until now. For a while it thought it would always have to stand on its side in the livingroom. But then it was displaced by the Christmas tree and spent December in the hall.

To make up for all this, the witch went to Glasgow and bought it something new to wear. 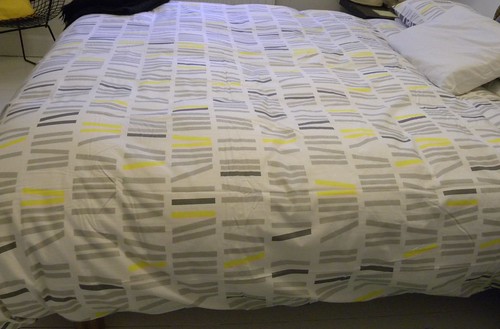 And then, when the hifi had been pondered and the now stationary bed slept in, the Resident IT Consultant and Son crept into the Grandmother’s flat while she was out and stole her kitchen table. But not her one and only. She has a collection of them. We needed a temporary desk for the boy.

They also lifted a rather nice bookcase, which I’ve had my eye on for almost 25 years. Although that was with permission.

This entry was posted in Blogs, Books, Travel and tagged House move. Bookmark the permalink.

One response to “The well-travelled library bed”