The Oxford Companion to Children’s Literature

The second edition, that is, rather nicely written and edited by Daniel Hahn. Although, as he acknowledges, he had a little help from his friends. And a foreword from Michael Morpurgo.

It seems Daniel is not a stranger to this business of reading a book and getting it signed and loving it to bits. He was once eight years old and met Roald Dahl and Quentin Blake and had his copy of The BFG signed by both of them. And here he is, a few years later, having actually edited The Oxford Companion to Children’s Literature.

Thirty years earlier the Resident IT Consultant had cottoned on to the fact that I quite liked children’s books, despite being married and old and all that. He went out and bought me (us, really) a copy of the first edition of the Companion, by Humphrey Carpenter and Mari Prichard. It is this text Daniel has edited, partly by removing a few old entries and partly by shortening some, in order to find room for all the exciting things that have happened to children’s literature in the intervening period.

It’s not just Harry Potter (the longest new entry). Try to imagine a world without Jacqueline Wilson, or Philip Pullman! Or all those other lovely writers and illustrators. Both the ones who made it into this edition, and the ones Daniel was forced to leave out. (I’ll have to speak to him about a few of them.)

I couldn’t help getting my (our) old copy out and making some very random comparisons. Roald Dahl has not only doubled in length, but he has died. Dick Barton is still in, as is Dido Twite. (I did mention it’s not only the authors, but their characters and various other types of entries that are in this book, did I?) And Daddy Long-Legs makes it.

The – to me – completely unheard of Hesba Stretton is still in. Carolyn Keene hasn’t changed, and I reckon Robert Heinlein and KM Peyton are both mostly intact. Likewise Joan Aiken, although she has been updated, obviously. There might be less of Peter Pan; I’m not sure, not having counted the words.

For a while I thought the entry on racism was bound to be a modern phenomenon, but it existed and was recognised in the 1980s as well.

There are about 70 more pages in the second edition, plus some very useful appendices on awards. 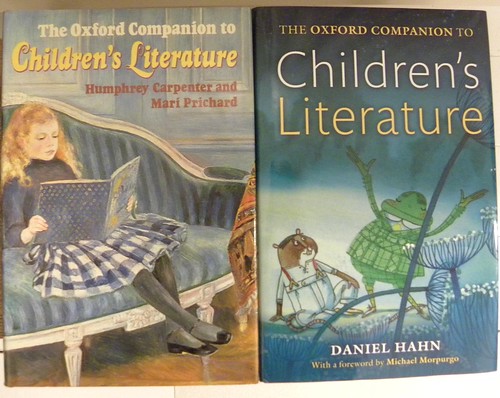 If you like children’s books, there is no question about it; you need a copy of the second edition. As for me, I suspect I won’t be able to part with the first, even though I can see that the new edition will be much more useful in my ‘work’ as well as for my own private enjoyment. The two volumes will look good together. And I might not last until a third edition comes along.

2 responses to “The Oxford Companion to Children’s Literature”