What a perfect book! I’d long wanted to read something by Andrew Norriss, and Jessica’s Ghost was a great place to start. It’s the kind of book that makes you glow gently as you read, and you feel you want to go on forever. 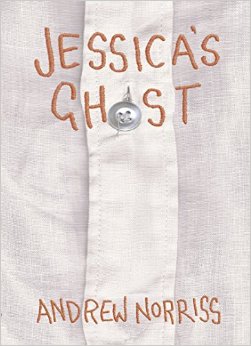 I’ve seen it described as a death book, but while any book about a ghost is obviously about death, I wouldn’t give it that label. It’s more about standing out because you’re different, lonely, and depressed.

Francis has no friends, and is bullied at school, so when he meets Jessica – who is a ghost and also dead – by the school playing field, he is simply happy to have made a friend. They share an unexpected interest, which is the one that sets Francis apart from his peers. He also has a mother, who does what I have been known to do; sets up her child to meet someone else’s child ‘because she is sure they will get on.’

This matchmaking friendship stuff has unforeseen consequences, which perhaps are somewhat unrealistic, but then this is a book where one of the main characters is a ghost. So that’s all right.

Jessica’s Ghost doesn’t necessarily take you where you thought you’d be going, and that’s understandable as Andrew says he had no plans when he began to write it. The plot just happened.

It’s quite funny, and also empowering. And what’s not to like about a story that features a Victoria Beckham zebra dress on the second page?

This entry was posted in Authors, Books, Reading, Review and tagged Andrew Norriss. Bookmark the permalink.