It’s St George’s Day. We have our very own Dragon guarding Bookwitch Towers.

He used to belong to the Grandmother’s mother, and Son liked him so much that twenty years ago Dragon came to live with us. For years he sat on the bedroom windowsill, staring out into the garden. That’s Dragon, not Son.

But with the Scottish move, Son was roomless for long enough that Dragon had to find somewhere else to live. He tried the mantelpiece for a while, but found it boring. (So do I. It’s not exactly my favourite mantelpiece. I don’t sit on it. I just stare.)

Then he tried the window towards the street, turning his back on the room and all of us. He likes it! 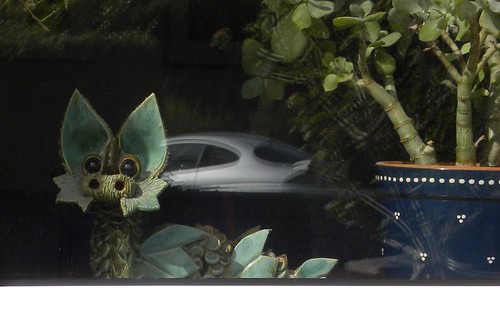 There is a lot to look at out there. Well, actually, not that much. It’s a fairly secluded street. But there’s more action than in the former back garden. And he can give the postmen/postwoman a good stare when they walk past him every morning.

He’s a good guard-dragon. And I doubt very much that he will deign to face us again, now that he’s discovered the outside world. Such as it is.