Do any of you feel like a school at all? I’m asking because the Edinburgh International Book Festival schools programme was released this week, and it’s what Kirkland Ciccone and others were rushing to Edinburgh for on Friday evening, after the Yay! YA+.

The organisers invited (I’m only guessing here) a group of authors, some of whom are part of this year’s programme, to come and meet the teachers and librarians who might be persuaded to book a session for their young charges in August. And as I keep saying every year; it’s the schools events you really want to go to. Except you can’t, unless you’re local enough to travel and can surround yourself with suitably aged children.

But you can treat the programme as a sort of guide as to who could potentially be in the ‘real’ programme, which won’t be released until the 10th of June, and you are forewarned. Or you might be disappointed when you find that your favourite someone is only doing schools this year. But at least they will be there, and you could get a signed book. 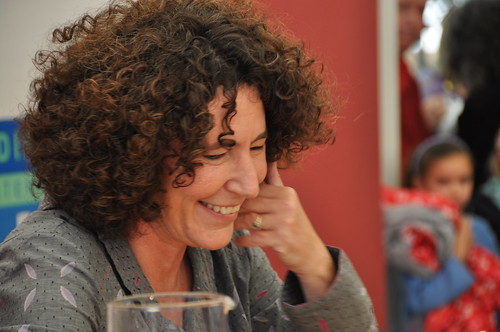 I’m already excited by the list of great names, even if Kirkland is also on it. I’m no school, though, so won’t be there. 😉 But perhaps this year will be the year when I catch a glimpse of Sarah McIntyre and Philip Reeve. Or Tim Bowler, David Almond or Ali Sparkes. The list is – almost – endless. I’ve already made a wish list for myself of people to look out for, or whose temporary husband I could be. Perhaps.

One response to “The EIBF schools programme”