Prayer for the Dead

If he’s not running around Edinburgh shivering in the snow, while wearing inadequate shoes, then James Oswald’s hero Tony McLean staggers round a sweltering Scottish capital. I remember that – last – summer well, and I sympathise. (He’s still a bit of an idiot, but he’s a kind and polite and likeable idiot. And we love him.)

The supernatural elements in Prayer for the Dead were a little confusing, as this time things are far more real than they have been in the past. Some of James’s villains are still quite insane, though, and you know there will be no reasoning with them. 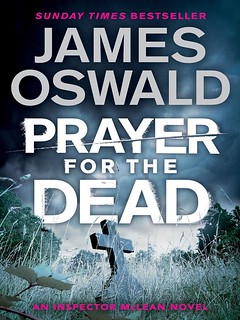 It’s the usual start; where the reader witnesses the murder happening, alongside the victim. You’ve not had time to get to know the victim, but you still feel for them, as they discover what is about to happen. And as far as one of the subplots is concerned, I am convinced James has been to Son’s former flat in Newington. He describes it perfectly. I reckon those builders must have been in on that one, too.

Things are awkward for McLean. Former enemies are brought closer than is comfortable, and he can’t even rely on his boss to be as impossible as he usually is. Must be time for a new new boss.

Anyway, lots of murders of the worst kind, and surely they are connected? That’s what McLean believes. MacBride and Ritchie are both suffering from what happened a few months earlier, and even Madame Rose has problems.

Prayer for the Dead is quite simply another page-turner; with just the right blend of gore, grit and good manners.