Yes, we have no kitchen today

Or tomorrow. Possibly some sort of kitchen next week. Maybe.

But that’s beside the point. It will be like childbirth, I suspect. Horrible while it lasts, but nice enough once you’ve got what you wanted. (What’s the kitchen equivalent to a baby who vomits down your back for six months?) 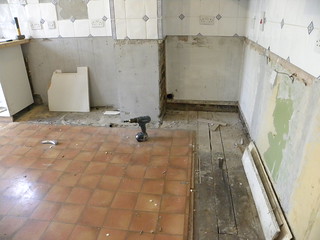 Times have changed in 27 years. While the bill at Ikea came to roughly the same amount this time and then (yes, that’s seriously weird), unlike last time we made a new kitchen we have disposed of the old one rather differently. Back then we didn’t even have to throw away the higgledy piggledy bits of worktop, as one of the people who paid money for our cast-offs, happily took the debris off our hands.

This time we broke all the cupboards into bits and chucked them into a skip, and that’s that. I am the first person to go the recycling way, but I can’t see anyone wanting what we had.

And the money we made proved to be a problem. I spent it on a much needed break for us in The Lake District. The Resident IT Consultant bought our very first video player. Perhaps we ought to have discussed the spending before spending…

I’m finding the whole kitchen thing more distracting than I expected. I’ve read a little. Panicked over unpaid tax, and water in places it has no business to be. But basically I won’t be back to normal – whatever that is – until we’ve come out the other end.

This entry was posted in Blogs and tagged House move. Bookmark the permalink.

2 responses to “Yes, we have no kitchen today”